The Wiegel is an artillery unit developed from the xvv-xcc Zedas C.[1] It is also referred to as the "Prototype Khronos", as it is the direct predecessor of the xvm-dgc Khronos.[1] It was piloted by Dole Frost prior to the formation of the Magicians 8.[1] Its main weapons are four long-range Wiegel Cannons, two of which extend from the back and another pair integrated into the forearms.[1] Its overall silhouette is similar to the Khronos, but with longer arms and exposed red cords that are similar in appearance to blood vessels on the limbs and backpack.

A long-range beam cannon mounted on each forearms and on each side of the backpack. The pair of forearm-mounted cannons can also emit beam sabers for close combat. 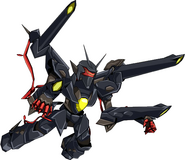