The xvb-xd Farsia is an X-Rounder-use Vagan mobile suit featured in Episode 14 of Mobile Suit Gundam AGE anime series. It is "piloted" by Yurin L'Ciel, though in fact it is actually controlled by Desil Galette, using his own X-Rounder ability.

The Farsia was specifically built to harness an X-Rounder's potential in mind.[1] The Farsia differs to other Vagan mobile weapons of its time due to its feminine design and lack of a transformation mode. It has been designed with considerations for situations where the pilot has had no formal training.[2] The Farsia is one example of mobile suit that can be controlled using X-Rounder power, ultimately allowing it to be operated without direct control of the pilot. However due to this, it is also necessary for the pilot to function as part of the vessel in order to receive feedback from the power.[2] Because the pilot is now "part of the mobile suit", it ultimately allows certain situations where tragedies can happen to innocents X-Rounder pilots such as its pilot, Yurin L'Ciel, whom have no Mobile Suit piloting experience.[2]

However, the Farsia makes up to its design as it is also made as a high speed unit, flying around on an auxiliary propulsion system pedestal. Using Yurin as a terminal, it is remotely operated by receiving and amplifying Desil's thought waves.[3] The unit is armed with several Farsia Bits, which can be controlled via brainwaves to execute devastating all-ranged attacks.

Farsia keeps five Farsia Bits stored in a backpack. These bits are developed by the Vagan as a multi-purpose, all-ranged remote weaponry. Each Farsia Bits can shoot concentrated beams into the enemy using its individual power generator, while controlling them using an X-Rounder's brainwaves.

The Farsia is also armed with a diffuse beam cannon on its chest.

While normally serving as the Farsia's "tail". This armament can be detached and used as a physical sword in close range combat, while possessing higher cutting power than a beam saber.

Due to the Farsia's lack of thrusters or transformation mode, the unit instead depends on its specialized pedestal for transport.

The Farsia was constructed at Ambat as a next-generation Vagan Mobile Suit with the purpose of attacking an enemy at all ranges. However, to control such a mobile suit, an X-Rounder must pilot the said mobile suit which is the reason Vagan abducted Yurin L'Ciel at Minsry.

Its first and only sortie to date is during the final duel between Flit Asuno, using the AGE-1S Gundam AGE-1 Spallow and Desil Galette, piloting the xvv-xc Zedas, from which he controlled the Farsia's movements against Yurin's will, forcing her to fight Flit. The Farsia proved to be an extremely effective mobile suit against the Gundam. However, as Desil was about to stab the Spallow with the Zedas Sword, Yurin was able to take control of the Farsia and take the fatal blow instead, destroying the mobile suit and killing her in the process. 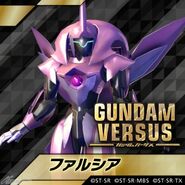