The XXXG-01Wfr Gundam Fenice Rinascita is a custom Gunpla and the successor of the XXXG-01Wf Wing Gundam Fenice from the anime series, Gundam Build Fighters. The Gunpla is modeled and primary controlled by Ricardo Fellini.

Mounted in the head, the pair of rapid fire Vulcan Guns are used as secondary ranged weapons. They are weak in power, but have wide applications such as intercepting incoming missiles.

Mounted on each shoulder, the Beam Mantle is a defensive equipment that functions like a beam shield. Like the the original Wing Gundam Fenice, the Gundam Fenice Rinascita can use its beam mantles to enhance its punches.

One of two melee armaments used by the Gundam Fenice Rinascita, its beam blade can cut through normal beam saber's blade. It is stored on the bottom of the Buster Rifle Custom, in front of the Handgun. It can be used separately as a handheld weaponry, or serve as a bayonet while mounted on the Buster Rifle Custom. It is also possible to use the Beam Saber after it combines with the Handgun to form a rifle, this form can be used in Flight Mode to remove obstacle or to damage enemies.

Stored in the Rinascita Wing Shield, it is the suit's second beam saber and has a design different. Its beam blade is capable of cutting through shields easily.

The white parts of the wings store several missiles that are mainly used during Flight Mode. 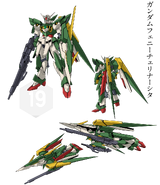 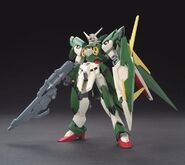 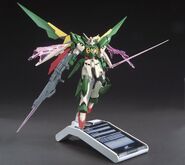 Gundam Fenice Rinascita Lineart
Add a photo to this gallery

Retrieved from "https://gundam.fandom.com/wiki/XXXG-01Wfr_Gundam_Fenice_Rinascita?oldid=497231"
Community content is available under CC-BY-SA unless otherwise noted.