Mounted on the clavicle sections of the Gundam, the pair of Machine Cannons are used as a secondary ranged weapon and have higher power than the Vulcan Guns.

Mounted within the Gundam's head, the pair of Vulcan Guns are used as a secondary ranged weapon.

One of two melee armaments used by the Gundam Fenice Rinascita, its beam blade can cut through normal beam saber's blade presumably due to its higher output. The Beam Saber can be used while mounted on the Buster Rifle Custom, serving as a bayonet, or separately as a handheld weaponry. It is also possible to use the Beam Saber after it combines with the Handgun to form a rifle, this form can be used in Flight Mode to remove obstacle or to damage enemy units.

Stored in the Rinascita Wing Shield, it is the suit's second beam saber and has a design different from the one attached to the Buster Rifle Custom. Its beam blade is capable of cutting through shields easily.

The white parts of the wings store several missiles that are mainly used during Flight Mode. 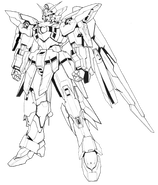 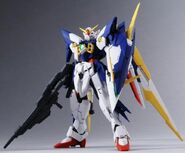 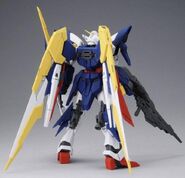 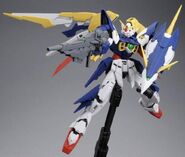 Retrieved from "https://gundam.fandom.com/wiki/XXXG-01Wfr/A_Gundam_Fenice_Rinascita_Alba?oldid=471824"
Community content is available under CC-BY-SA unless otherwise noted.