The Wing Gundam Fenice is the Gunpla of Ricardo Fellini, the Gunpla Champ of Italy. Based on the Wing Gundam from Mobile Suit Gundam Wing, it is remodeled with unique left and right asymmetry, which includes heterochromia eye cameras (which are red and green-colored respectively). Its asymmetry negatively affected its balance and make it difficult to control, but Fellini is able to overcome it with his superior piloting skills. The suit's right antenna and wing-like ear protrusion bear scars of previous battle and the Bird Mode is omitted with all these modifications. The Wing Gundam Fenice is armed with similar weapons as the original Wing, but the buster rifle has been modified while the beam saber and shield are replaced by the beam rapier and the beam mantle respectively. It also has an additional shoulder beam cannon and can utilize a support craft, the Meteor Hopper, for better ground performance. The Gunpla's main color of green, white and red is meant to imitate the Italian flag.

The Buster Rifle Custom is Wing Gundam Fenice's primary weapon and can be stored on the right side of the backpack. It is the Buster Rifle with a Small Rifle mounted at the bottom. Both rifles can be separated and used independently.

The top portion of the Buster Rifle Custom when it is separated into two rifles, it is capable of firing a narrow beam akin to that of a beam rifle or a huge blast like that of a beam cannon.

A small beam rifle at the bottom of the Buster Rifle Custom, it can be used while still attached or as a separate rifle. It fires standard sized beam shots.

The Beam Rapier is the primary melee armament for the Fenice. When not in use, it is stored on the left forearm, where it doubles as a rapid-fire beam gun.

The mantle is the suit's defensive armament and functions like a beam shield. It can also be wrapped around the suit's arm to increase the effectiveness of its punches.

Mounted in the head, the pair of rapid-fire Vulcan Guns are used as secondary ranged weapons. They are weak in power but have wide applications such as intercepting incoming missiles.

Located in the right shoulder, it is useful for firing at an enemy while charging, or when the Buster Rifle Custom is unavailable.

A motorcycle-like support craft, it is primarily used to increase the Wing Gundam Fenice's ground speed and mobility. The Fenice's Buster Rifle can attach to the Meteor Hopper and fires using the 2 energy tanks stored behind the wing-like binders. When required, the Meteor Hopper can transform into its MA form by extending/spreading out the binders and retracting the grey stand-like protrusion that is mounted below the craft. In this form, the Meteor Hopper functions as a sub-flight system (like the Base Jabber).

Like the original Wing Gundam, Wing Gundam Fenice is equipped with a self-detonation device.

For the history of the Wing Gundam Fenice, go to Ricardo Fellini 's page 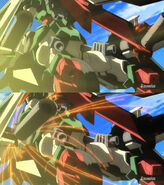 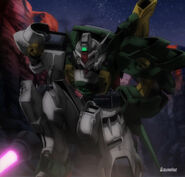