A close combat mobile suit, the Shenlong Gundam is built by Master O of the L5 Colonies. Its primary armament consisted of head mounted vulcans, a Chinese/Japanese style "beam glaive", a shield on the left arm, and a Chinese inspired "dragon fang" on the right arm. The dragon fang is an extendable weapon armed with "claws" for grappling an opponent and two flamethrowers on the sides. Thanks to the dragon fang and its flamethrowers, the Shenlong also has medium range combat capabilities. In the Katoki version, the beam glaive is replaced by a beam trident and the dragon fang is non-extendable.

This javelin-style weapon is stored on the Shenlong Gundam's back. The beam blade at its tip can pierce its target's weak spots with pinpoint precision. The Katoki version has this weapon replaced with a single-ended beam trident.[1]

Used by the Katoki version, it is similar to the beam glaive just that the beam blade emitted is larger and shaped similar to a trident. Stored on the back when not in use.

These short-to-medium range weapons fire from the pair of nozzles built into the sides of the dragon fang. They can be used as part of the deadly "dragon fang fire" attack, in which the Shenlong Gundam seizes its target with the dragon fang and then fires a burst from the flamethrowers, melting the enemy's armor like clay or ice.

The simple and compact design of this shield attests to the mobile suit's emphasis on melee combat. It can also be thrown as an offensive weapon.

An additional weapon for the Katoki version, making its debut in Gundam Wing - Endless Waltz: The Glory of Losers. This sword is connected to the Shenlong Shield via a cable attached to the bottom of the hilt.

A unique system installed in the shoulders and chest. During combat, it instantly calculates the precise position, movement, and weak points of an opponent.

The Shenlong Gundam was built to self-destruct should the pilot choose to. A remote detonator is placed within the cockpit and if a dire situation arrives, the pilot can destroy the Mobile Suit. The system was designed to overload its power systems and has enough explosive power to destroy several city blocks. It's a last option tactic if the pilot is incapable of protecting the Mobile Suit, while not allowing it to fall into enemy hands. It also can be used as one large explosive device to eradicate large targets.

The Gundam called Shenlong was design and constructed by Master O somewhere in the L5 colony cluster. As the Shenlong Gundam was nearing completion, Mei Lan Long (Wufei's fiance) had taken the name of "Nataku", stole a mobile suit, apparently the OZ-00MS Tallgeese, when the colony was attacked. Nataku piloted the Tallgeese out into space with a beam cannon. The ensuing battle took its toll on Nataku and she later died in Wufei's arms. Her death caused Wufei to take up the job of piloting Shenlong against the United Earth Sphere Alliance and OZ. Throughout the series, Wufei affectionately called the Shenlong Gundam "Nataku" after his deceased wife. 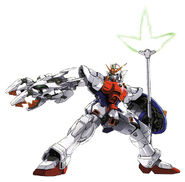 The early design of Gundam W Gundam, Shenlong Gundam is the second from right.

Shenlong ver. Ka with sword, from Glory of Losers

Shenlong slashes an Aries with Liaoya

Retrieved from "https://gundam.fandom.com/wiki/XXXG-01S_Shenlong_Gundam?oldid=363003"
Community content is available under CC-BY-SA unless otherwise noted.