The XXXG-01ST T'ien-Lung Gundam (or Tianlong, meaning "heaven dragon" in Chinese) is a mobile suit based on the Altron Gundam. It appears in the semi-official one-issue comic New Mobile Report Gundam Wing Sidestory: Tiel's Impulse.

A unique feature of the T'ien Lung was that its entire body was covered with solar fuel cells and reflectors, allowing it to take in energy as long as it was within sight of the sun and also reduced the unit's heat output. Additionally, T'ien Lung included a ZERO System that allowed it to remotely direct Mobile Dolls. As it was intended to always operate with such support, T'ien-Lung's weapons are limited to a pair of dragon fangs.

A single T'ien-Lung unit was acquired by a friend of Tiel Noembreux; Krung Ponlamaai, during the theft of the Gundams at the Colony X-18722 manufacturing plant. Planning to join the Mariemaia Army, Krung attempted to kill Tiel. However, she and Gundam Tien'Lung are destroyed from an accidental Buster Rifle shot when Tiel inadvertently activates Gundam Seraphim's ZERO System. 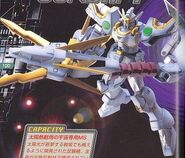