An upgrade of the original Gundam Sandrock to make it capable of space combat. Verniers were added to the shoulder, back skirt, backpack, and legs to increase mobility in space. As the added backpack vernier took the place of the mounting point for the shield, the suit can no longer use the Cross Crusher. It also gains a beam machine gun for better mid-range combat capability in space. Like the original, the Sandrock Custom can function as a commander unit for team operations.

The EW version has a slimmer frame compared to the TV version and a light purple-based color scheme instead of white and gray. While the homing missiles and beam machine gun are omitted, the heat shotels, shield and head vulcans are retained. It can also use the anti-beam coating cloak which is not present in the TV version. In the "Glory of the Losers" manga, thrusters are added to the central part of the backpack, improving its thrust.

These heat-radiating curved blades are the Gundam Sandrock Custom's main weapons, and with them, it can cut an enemy in half with each hand simultaneously. They can also be used as throwing weapons. When not in use, they are stored on the backpack. In the EW version, the blades are larger and the heat shotels can be connected at their pommels to form a double-bladed weapon.

A small automatic tracking missile stored in both shoulders. Only present in the TV version.

Designed with a snakehead motif, it features two claws as "fangs", and two shield flashers as "eyes". The shield has an anti beam coating, and the shield flashers can release a blinding flash to confuse enemies. In "Glory of the Losers", the EW version retains the shield.

A compact, handheld beam firearm. While its shots are weaker than those of standard beam rifles, its rate of fire is much greater.

A high output, long-range beam firearm powered by energy cartridges similar to the XXXG-01W Wing Gundam's buster rifle. The beam rifle is dropped by Quatre after blowing a hole in the Libra's hull in order to escape during the conclusion of the Eve Wars.

A small gun that fires a highly directional laser, it is capable of penetrating the electromagnetic barrier generated by the Virgo's Planet Defensors. It is stored on the rear waist armor when not in use.[1] It is only used by the EW version.

A copy of Wing Gundam Zero's cockpit interface system was installed on the Gundam Sandrock Custom temporarily. Heero ordered it so that Quatre can lead the other Gundams while he would duel with Zechs. To activate the system, Quatre has to key in the code 'ZERO'. After using the system successfully, Quatre removed it upon returning to Peacemillion as he felt he can fight without it.

The Gundam Sandrock Custom was built to self-destruct should the pilot choose to. A remote detonator is placed within the cockpit and if a dire situation arrives, the pilot can destroy the Mobile Suit. The system was designed to overload its power systems and has enough explosive power to destroy several city blocks. It's a last option tactic if the pilot is incapable of protecting the Mobile Suit, while not allowing it to fall into enemy hands. It also can be used as one large explosive device to eradicate large targets.

Although Quatre Raberba Winner had activated the self-destruct system on his Gundam Sandrock during his escape into space, the ensuing explosion had rendered the mobile suit useless - but its Gundanium alloy body was still more or less intact. The Sandrock's remains were confiscated by OZ, but later would be retrieved by members of his Maganac Corps allies and taken to their underground base in the Middle East, where it would be rebuilt and fully restored. After Quatre's return to Earth, he returned to the Maganac Corps to pilot his Gundam once again. As the military and political strife plaguing the Earth Sphere in AC 195 would reach a decisive conclusion in space, and Quatre returned to space with his Sandrock to join the battle. Aboard the independent battleship Peacemillion, Gundam supporter Howard would upgrade the mobile suit, giving it minor improvements for space combat.

Though the changes made to the Gundam Sandrock Custom were cosmetically minor, they would give the mobile suit the edge it needed to use its abilities against the space-bound forces of White Fang's Virgo II mobile dolls and the mobile suits of the World Nation military. The addition of several vernier thrusters made the Sandrock stable to operate in a zero-g environment. Also, over Quatre's protests, Gundam pilot Heero Yuy also temporarily outfitted the Sandrock Custom with a component of the XXXG-00W0 Wing Gundam Zero's infamous Zero System, allowing Quatre to coordinate the Peacemillion's mobile suit forces in an assault against White Fang's mobile dolls. The Zero System was removed by Quatre afterwards.

Two years later, Quatre and the other three Gundam pilots, save for Wufei, decided to send their Gundams into the sun through the mobile asteroid Vulkanus. However, in AC 197 the Barton Foundation upsurped the pacifist Earth Sphere Unified Nation and abducted its leader, Representative Relena Darlian. To combat this new threat, Quatre, after dispatching Wing Zero to Heero, redirected the course of Vulkanus so that it would not collide with the sun. Later, Quatre, Trowa, and Duo retrieved their respective Gundams from the asteroid and traveled to Earth to assist Zechs Merquise and Lucrezia Noin who were fighting an army of Serpent mobile suits in Brussels, Belgium. After the Marimeia Conflict was over, Sandrock was self-detonated alongside Deathscythe and Heavyarms. 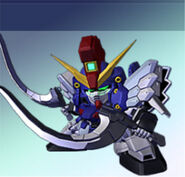 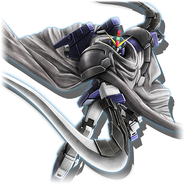 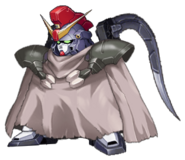 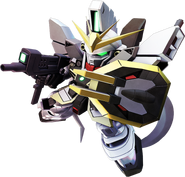 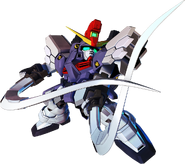 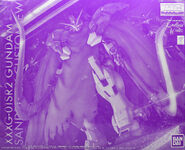 Profile of Gundam Sandrock Custom (EW ver.) from Glory of the Losers manga