The XXXG-01S2 Altron Gundam (aka Altron, Nataku, or Gundam Zero-Five), is the upgraded version of XXXG-01S Shenlong Gundam that appears in Mobile Suit Gundam Wing and New Mobile Report Gundam Wing: Endless Waltz. The unit is piloted by Chang Wufei.

Altron was built from the wreckage of Shenlong, the Gundam scientists quietly used the OZ manufacturing facilities from the moon to upgrade the Gundam with new equipment and weaponry. Altron is still a close combat unit, but was given more mid-range weaponry. Overall, Altron has twice the fire power and combat capabilities than its predecessor.

While Shenlong had only one Dragon Fang (an extendable claw-like weapon with a pair of built-in flame throwers), Altron has two of them (hence the Altron name, taken from the Chinese "ertou long" or "two-headed dragon"). The original beam glaive (beam trident in the Katoki version) is replaced with a double-ended twin beam trident. A pair of beam cannons have also been added to its back on a "Stinger Tail," giving it additional ranged firepower. Altron was configured and adapted for space combat; its cockpit is now pressurized and a pair of stabilizer wings was added on its back for greater mobility and flight control. The only thing left unchanged was Shenlong's Shield. It was left attached to Altron for charging and throwing, however, it was renamed into the Altron Shield.[1] Added with Chang Wufei's martial arts combat skills when piloting, Altron is one of the most formidable in melee combat.

Hajime Katoki's redesigned version of Altron. Its origin and history remains consistent with the TV series, but Altron's combat capabilities have been changed.

Just like the original, the Dragon Fangs were upgraded from a single unit into a pair. However, the Dragon Fangs are connected to the forearms via a set of folding blocks and not part of the entire MS arm. Should the Dragon Fangs become damaged or destroyed in combat, Altron's MS arms remain intact for combat. The fangs' sides have four small wings to control movement when launched. When stationary, the Dragon Fangs can also be used as a shield. The greatest difference is that these versions can stretch about 3-4 times its arm length, longer than its TV counterpart is capable of. For unexplained reasons, there are no built-in flame throwers.

Another thing not present is the Altron's shield. The only things it does have are its head Vulcans, Twin Beam Trident, and a parachute for atmospheric entry. In New Mobile Report Gundam Wing Endless Waltz: The Glory of Losers, the Katoki version of the Altron saw the return of the scorpion tail-shaped pair of beam cannons on its back.

Altron has a pair of beam cannons located on a scorpion-like tail on its back. The weapon is developed based on the Vayeate's cannon, it has roughly a 180 degree firing range and as it is mounted on a turret, can rotate to attack enemies at the sides. While absent in the first depiction of Altron EW, it made a return in the Glory of Losers manga.

In both versions, the Dragon Fangs is a claw-like weapon shaped in the form of a dragon's head and mounted on both arms. In the TV version, the Dragon fangs can be extended for medium-range combat as the arms have additional segments folded in the shoulders, and were designed for quick direct strikes against enemy MS, often against their head or their torso. Like the original on Shenlong Gundam, Altron's Dragon Fangs are also equipped with flamethrowers. Due to their designs, the Dragon Fangs have limited flexibility when launched and can only attack enemies in a straight line. As the Dragon Fangs are mounted on the Altron's arms, the unit would suffer serious combat limitations should they be destroyed or severely damaged in combat.

On the Katoki version, the Dragon Fangs have no built-in flamethrowers but are still extendable. They are also 3-4 times larger than its TV counterpart, have greater strike range and can be used as a shield to protect against most firearms. The Dragon Fangs in this version are mounted differently, they are attached to a set of foldable, highly maneuverable sectional blocks which are then attached to the arms. Thanks to this design, they have more flexibility when launched and even if they are destroyed in combat, Altron still retain the use of its arms. When launched, 4 miniature wings in the rear control the direction of the attack.

These short-to-medium range weapons fire from the pair of nozzles built into the sides of the dragon fang. The flamethrowers on Altron Gundam are several times more powerful than the ones on Shenlong Gundam, and can be used in the vacuum of outer space. The flamethrowers only exist on the TV version.

The same shield as the one used by Shenlong Gundam. When upgrading the Shenlong to Altron, the scientists simply cleaned up the shield and attached it to the Altron's left shoulder, renaming it as the Altron Shield. The shield is often used as a ramming device and to protect the unit from incoming fire when Wufei charges towards a target. The shield is only featured on the TV version.

In both incarnations of Altron, it wields a Twin Beam Trident. It is an upgrade from Shenlong's beam glaive (TV Version) / single-ended beam trident (Katoki Version) and has more strength and versatility as a weapon.

The same unique system used by the Shenlong, it's installed in the shoulders and chest. During combat, it instantly calculates the precise position, movement, and weak points of an opponent.

The Altron Gundam was built to self-destruct should the pilot choose to. A remote detonator is placed within the cockpit and if a dire situation arrives, the pilot can destroy the Mobile Suit. The system was designed to overload its power systems and has enough explosive power to destroy several city blocks. It's a last option tactic if the pilot is incapable of protecting the Mobile Suit, while not allowing it to fall into enemy hands. It also can be used as one large explosive device to eradicate large targets.

After the XXXG-01S Shenlong Gundam was captured and damaged by OZ's forces in AC 195, it was taken to OZ's lunar base and mobile suit factory for storage. The five scientists who had built the Gundams plaguing OZ were also at the lunar base, captured and forced to develop new mobile suit technology to secure OZ's rule over Earth and the space colonies. Despite their apparent "cooperation," however, the scientists also began rebuilding and upgrading both the Shenlong and the XXXG-01D Gundam Deathscythe in secret, preparing for the day when captured Gundam pilots Chang Wufei and Duo Maxwell could return to the battlefield. That opportunity came when the Romefeller Foundation - the political force behind OZ - became split over a number of issues, and the "Treize Faction" of OZ attacked the lunar base, which at the time was still under the control of Romefeller loyalists. During the chaos, Lady Une released both Duo and Wufei with their partially upgraded XXXG-01D2 Gundam Deathscythe Hell and XXXG-01S2 Altron Gundam. Henceforth, the Altron Gundam would be a menace to the OZ and, later, the White Fang army during the "Eve Wars".

During the Eve Wars, Wufei destroyed many of the White Fang's Virgo II Mobile Dolls using the Altron before encountering Treize Khushrenada in his Tallgeese II and fights a one on one beam saber battle with him; despite Treize initially having the upperhand in the engagement, he ultimately allows Wufei to pierce the Tallgeese's cockpit, causing it to explode and killing him. Later, Wufei returned Wing Gundam Zero's Twin Buster Rifle back to Heero, who managed to use it to destroy the last fragment of Libra and prevent it from crashing into Earth, ending the Eve Wars.

After AC 195, Wufei, wanting to see what the true meaning of justice is, took the Altron with him to the newly formed Mariemaia Army instead of sending it into the Sun with the other Gundams. Wufei fought against Heero Yuy twice, once when the latter was piloting an outdated OZ-06MS Leo and the second time when Heero piloted a revived Wing Gundam Zero. Wufei, seeing that people are now fighting for peace and not just waiting for peace to come, rebelled against the Mariemaia Army during the battle in Brussels. After the rebellion, the Altron was later self-detonated by Wufei 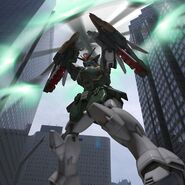 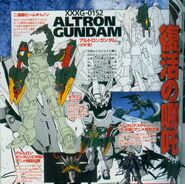 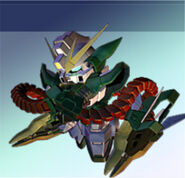 Retrieved from "https://gundam.fandom.com/wiki/XXXG-01S2_Altron_Gundam?oldid=363004"
Community content is available under CC-BY-SA unless otherwise noted.