Based on the Altron Gundam, which has dragon heads on its arms, this machine adds tiger and wolf concepts. Behind its simple appearance, this Gunpla warrior conceals the agility, cunning, and ferocity of a wild beast.[1] The Gunpla turns golden prior to executing its finish moves.[2][3]

By saving up Diver Points and reaching Rank C, Divers can unlock unique finish moves that fit their Gunpla and their fighting style.[2][4] However, these moves cannot be learned instantaneously.[4] Tigerwolf's finish move, "Ultimate Secret: Ryukorodo", is the culmination of his life in GBN.[2] When executing this attack, Jiyan Altron emanates energy from its whole body via its right fist, releasing two streams of energy resembling a tiger and wolf that later combine into a larger and stronger dragon-like energy beam that can destroy an enemy in one hit.[2][4] The image of the tiger, wolf and dragon reminds one of Tigerwolf's nickname, "Tri-Fang".[4]

The Jiyan Altron pounds both the Wolf-Ken and Tiger-Ken together, creating an energy sphere that is released as a stream of beam. This beam then forms a barrier around the opponent upon impact, immobilizing it. Then as implied by the move's name, Land Strike・Rising Dragon Attack (陸撃・昇龍打, Rikugeki Shōryūda?), the Jiyan Altron follows up with an earth-shattering punch at the ground, sending an energy dragon rising from the earth and striking the opponent.[5]

The Jiyan Altron performs the Ryukorodo, but with the GN-1001N Seravee Gundam Scheherazade's GN Claw Container in its right hand, enhancing the attack. The tiger and wolf-like beam released take on a new color, so do their combined dragon-like energy beam. This attack's power is on par with AGE-IIMG-SV Gundam AGEII Magnum SV ver.'s 'EX Calibur' attack.[5]

One of the Twin Jiyan Fang deployed (Ep 18) 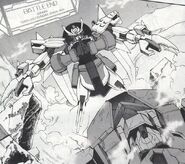 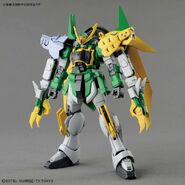 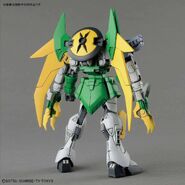 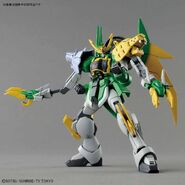