The XXXG-01H Gundam Heavyarms (aka Heavyarms or Gundam Zero-Three) is a mobile suit from the series Mobile Suit Gundam WIng. It was the third of Operation Meteor's five Gundams, and was piloted by a young man operating under the pseudonym Trowa Barton.

Created by Gundam Scientist Doktor S, the Heavyarms was developed in the L3 Colonies under the financial support of the Barton Foundation. The Heavyarms is a long-range attack unit with a variety of built-in firearms. Its design is a combination of the firepower aspect of the Wing Gundam Zero with an emphasis on overwhelming suppressive fire. Its overall firepower is comparable to 3 to 5 battleships', but its attack power drops drastically once it run out of ammunition. However, with the skilled circus performer Trowa's excellent piloting sense, the Heavyarms is capable of acrobatic melee combat.

Mounted on the clavical section of the Heavyarms, the pair of machine cannons have stronger firepower than the vulcan guns.

A pair of gatling guns mounted in the left and right chest, they are hidden by openable armor covers. They can be fired together with the machine cannons and vulcan guns to restrict enemy units from closing in.

Six homing missiles are stored within the shoulders of the Heavyarms, they are fired at the enemies with a lock-on. The EW (Endless Waltz) version features more of these missiles (44) and they are stored in the front skirts and missile pods mounted on the legs.

Two pods each containing twelve micro missiles are mounted on the legs of the Heavyarms. The EW version features more of these missiles (52) and they are stored within the shoulders and the side skirts.

A high output beam weapon that serves as the Heavyarms' main armament, it is worn over the left forearm and can be used for defense as it is equipped with a shield. A foldable foregrip can be attached to allow the weapon to be supported by the right arm. It is mounted on the backpack when not in use. The beam gatling's disadvantage is that it causes the Heavyarms to tilt to the left when it is used. In the EW version, this beam weapon is handheld, and connected via a cable to an energy tank mounted on the suit's back. The attached shield is optional and can be mounted on one of the suit's forearms.

A knife made of Gundanium alloy and fixed to the right arm, it flips forward when in use. Despite its small size limiting its attack range, it has no problem slicing apart enemy mobile suits.

Stored in the left forearm for Heero's rematch with Zechs. It was presumably borrowed from the Wing Gundam, having the same green beam blade. When the Beam Gatling is out of ammo, it and the left forearm is detached, revealing the beam saber stored within. The beam saber is then wielded by the right hand.

Debuting in New Mobile Report Gundam Wing Endless Waltz: The Glory of Losers, this set of extra weapons for the EW version was used when attacking the Corsica Base. It also has leg-mounted crawler units for high-speed ground movement to compensate for the drop in mobility due to the increase in weight caused by the added weaponry. All added weaponry can be ejected instantly via explosive bolts.

Each shoulder is additionally equipped with twelve container blocks that have four missiles in each block. They can be used to attack in all directions as their launch ports not only face the front, but also to the sides and rear.

A powerful beam weapon externally mounted to a trailer, it can destroy several Mobile Suits in one shot. However, it can only be fired once as the weapon's weak barrel cannot withstand its power.

Used only by the EW version, it is an atmospheric flight unit equipped with 6 prop rotors and 2 auxiliary jet engines. Since it is mounted in the center of the backpack, it does not interfere with the beam gatling or energy tank. Because it is top-heavy, the support leg in the center of the equipment is extended to support the Heavyarms when landing.

The Heavyarms was built to self-destruct should the pilot choose to. A remote detonator is placed within the cockpit and if a dire situation arrives, the pilot can destroy the Mobile Suit. The system was designed to overload its power systems and has enough explosive power to destroy several city blocks. It's a last option tactic if the pilot is incapable of protecting the Mobile Suit, while not allowing it to fall into enemy hands. It also can be used as one large explosive device to eradicate large targets.

The Gundam design teams, however, did not want their creations used as weapons of mass murder and decided to wage the war for colony independence in their own way. Coming up with a new plan for Operation Meteor, Doktor S killed the original Trowa Barton. An anonymous young mobile suit mechanic took over as the pilot of the Gundam Heavyarms, adopting the name of its former pilot.

As Operation Meteor escalated into a full-fledged war between OZ and the five Gundams, it became clear that the battle would eventually have to be fought in space. Since Gundam Heavyarms was designed primarily for ground-based combat, it would need to be upgraded for space combat. Lacking the resources for such an upgrade however, Trowa instead opted to abandon the Heavyarms on Earth before leaving for outer space. Sally Po eventually discovered the abandoned Heavyarms, but was unable to make use of it despite being accompanied by Gundam pilots Heero Yuy and Chang Wufei. After meeting up with the remaining Gundam pilots aboard the Peacemillion, Howard ordered its crew to perform the necessary upgrades before returning it to Trowa, modifying it into the Gundam Heavyarms Kai. 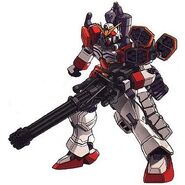 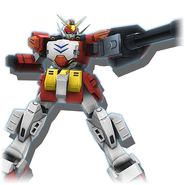 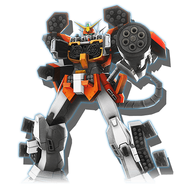 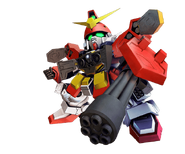 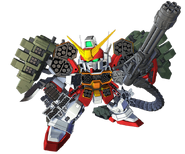 Retrieved from "https://gundam.fandom.com/wiki/XXXG-01H_Gundam_Heavyarms?oldid=449552"
Community content is available under CC-BY-SA unless otherwise noted.