The XXXG-01HD Gundam Derringer Arms is a Romefeller Foundation mass production Mobile Suit based on the XXXG-01H2 Gundam Heavyarms Kai. It appears solely in the semi-official one-issue comic New Mobile Report Gundam Wing Sidestory: Tiel's Impulse. Intended to operate within a set, small area, such as cities or bases, the design was refined to lessen its ranged combat abilities to save money. As a result, it features less weapons than its original counterpart as well as removing the blade antenna, lowering the overall range of its radar.

Developed late in the Eve Wars, the Romefeller Foundation began development on a new series of mass production Gundams to revive their failing fortunes.Inspired by the XXXG-01H2 Gundam Heavyarms Kai, they produced a heavy assault Gundam dubbed Derringer Arms, named for the pocket pistol invented in the 19th century. As its name implies, Derringer Arms was intended to function in a smaller area, specifically to act as a guard for bases or cities. As a result, it lacks the distinctive V-fin antenna, shortening its radar range. Its main arsenal consisted of a handheld double beam Gatling gun, chest-mounted Gatling guns, homing missiles and micro-missiles, but less in number than its inspiration. This was due to the fact it was always intended to operate near a location where it could be resupplied quickly.

With the end of the conflict, the mass-produced Derringer Arms units were never used. However, the following month, one unit was stolen by Trinoi Levinski, a former member of OZ's space force who was forced to retire after sustaining injuries to his left arm. Along with his friends Tiel and Krung Ponlamaai, Trinoi went to the shoal zone Graveyard of Soldiers in an attempt to locate Tiel's missing brother. When the trio finally reached the Graveyard of Soldiers, they encountered the Romafeller's pursuit force at least two times, Trinoi was able to destroy both enemy Gundams in the second battle, although his Gundam Derringer Arms explodes from sustained damage, at the cost of his own life. 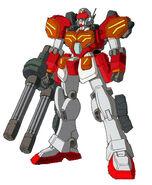 Retrieved from "https://gundam.fandom.com/wiki/XXXG-01HD_Gundam_Derringer_Arms?oldid=356717"
Community content is available under CC-BY-SA unless otherwise noted.