The XXXG-01H2 Gundam Heavyarms Kai (aka Heavyarms Kai or Gundam Zero-Three) is the upgraded form of the original XXXG-01H Gundam Heavyarms. The suit received a major design change for the OVA Endless Waltz, with a dark blue and light blue color scheme instead of the traditional red and white. The unit is piloted by a young man operating under the pseudonym Trowa Barton.

An upgrade over the Heavyarms to make it worthy for space combat and improve its weaponry. Several vernier thrusters were added to give the Heavyarms more stability and mobility in a zero-gravity environment. Its Beam Gatling Gun was also improved, having two Gatling barrels instead of the original's one, and this allows the Gundam to deal more damage.

Instead of the red and white color scheme of the TV Version, the OVA Version instead sports a dark blue and white theme. This version also sports much more missiles, two more chest Gatling guns, and exchanges the army knife for an extra double-barrel gatling gun, resulting in an extreme amount of firepower.

A pair of machine cannons is concealed within the clavical armor of the Heavyarms Kai. Sports stronger power than the vulcan guns.

Six homing missiles are stored within the shoulders, they are fired towards an enemy/enemies with a lock on. The Katoki version features more of these missiles (44) and they are stored in the front skirts and missile pods mounted on the legs.

In the TV version, 24 missiles are stored in two pods on the legs. The Katoki version features more of these missiles (52) and they are stored within the shoulders and the side skirts.

The chest armor is opened when these weapons are fired. Being the second most powerful weapons in the Heavyarms Kai's arsenal, they possess enough power to cause significant damage to even Gundanium alloy. The Katoki version has four of these.

The addition of an extra barrel proves to increase weight, but it can also cause more destruction to the enemy forces. In the TV version, the Heavyarms Kai carries one Double Barrel Beam Gatling Gun mounted on its left arm. In the Katoki version, it is redesigned as a handheld weapon, with one held in each hand. The Katoki version also lacks the shield featured on the TV version.

Found only on the TV version design, it is mounted under the right arm and is the only melee weapon of the Heavyarms Kai. It however, has limited capabilities as a weapon, as it lacks sufficient reach.

The Heavyarms Kai was built to self-destruct should the pilot choose to. A remote detonator is placed within the cockpit and if a dire situation arrives, the pilot can destroy the Mobile Suit. The system was designed to overload its power systems and has enough explosive power to destroy several city blocks. It's a last option tactic if the pilot is incapable of protecting the Mobile Suit, while not allowing it to fall into enemy hands. It also can be used as one large explosive device to eradicate large targets.

The End of Gundam Heavyarms

When Trowa Barton left Earth with the other Gundam pilots, he left his Gundam Heavyarms on Earth, hidden away. Trowa infiltrated OZ and became one of their top soldiers, taking the Vayeate as his mobile suit. Later, during the battle with Quatre, Trowa seemingly sacrificed himself in hope of bringing Quatre back from insanity (as he was under the control of the infamous ZERO system). Trowa was presumed deceased, although Quatre wasn’t going to give up looking for him, Trowa turned up over 10 episodes later with memory loss, thus forgetting where he had hidden Heavyarms.

Sally Po later finds Heavyarms and gives it to Heero to take up to space. Heavyarms was brought to the independent battleship Peacemillion where Gundam supporter Howard would upgrade the Heavyarms for space battle (Heavyarms was the last of the five Gundams to receive this upgrade) thus Gundam Heavyarms Kai is born. Trowa regained his memory when he, under recommendation from Heero, took Wing Zero to save a colony that had been taken over by OZ. The ZERO system gave Trowa a boost to his memories, to the delight of Quatre. Trowa then used Heavyarms Kai during the battles against White Fang whilst teamed up with the other 4 pilots and then on to the Eve War, the final battle of the series.

In A.C. 196, Trowa sends the Heavyarms Kai over to Quatre to be destroyed. When he realized that the Barton Foundation is planning to carry out the original Operation Meteor, he infiltrates the the Mariemaia Army, much like he infiltrated OZ a year earlier, and uses a Serpent unit instead (Which has similar armaments to the Heavyarms Kai, as both were built by the Barton Foundation). Trowa switches back to the Heavyarms Kai for the battle in Brussels. During the battle, the Heavyarms Kai disabled many Serpent units without killing the pilots using specialized, non-explosive rounds. However, it eventually ran out of ammo due to the large amount of enemies and the toughness of the Serpents' Neo-Titanium armor. After the battle, Heavyarms Kai is seen with Deathscythe Hell and Sandrock Kai as the pilots self-detonated them, destroying the Gundams once and for all. 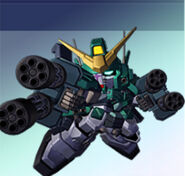 Retrieved from "https://gundam.fandom.com/wiki/XXXG-01H2_Gundam_Heavyarms_Custom?oldid=364683"
Community content is available under CC-BY-SA unless otherwise noted.