The XXXG-01D Gundam Deathscythe (aka Deathscythe or Gundam Zero-Two), is the second of five Gundams sent down to Earth from the Space Colonies in New Mobile Report Gundam Wing. It was piloted by Duo Maxwell.

The Gundam Deathscythe was the "masterpiece" of Professor G. It was developed to be a master of infiltration, relying on shock and awe tactics to quickly and effectively accomplish its missions. To this end, one of its primary features was a pair of Hyper Jammer ECM suites mounted on its backpack. When in use, they prevented the Gundam from showing up on radar or visual sensors, rendering it invisible to most electronics. This allowed it to sneak into facilities and even right up to enemy mobile suits without being detected.

Once in combat, the Deathscythe's primary weapon was its namesake beam scythe. The power and overall reach of the scythe enabled it to destroy most single (and sometimes multiple) targets in one sweep, while its high thruster count let it move rapidly from target to target. The Deathscythe also typically carried a Buster Shield on its left arm, which doubled as launchable scissor katar. Rounding out its arsenal was a set of standard head-mounted vulcan guns and collar-mounted machine cannons.

As effective in combat as these features made it, perhaps the greatest weapon the Deathscythe bore was simply the fear it generated. The suddenness with which it arrive, its invisibility on sensors, and the speed and ferocity of its attacks were all designed with psychological warfare in mind. So too was its sinister appearance, incorporating elements such as a bat-like silhouette and hooded, grim reaper visage. All of these factors would make the Deathscythe a singularly fearsome and formidable machine - especially in the hands of the self-styled "God of Death", Duo Maxwell.

A shell firing weapon mounted within the shoulders capable of dealing significant damage to lightly armored mobile suits. These weapons are omitted in the EW redesign.

A powerful close combat beam weapon weapon that is able to cleave through any armor. The heat and powerful magnetic field it produces can begin to disintegrate the target even as the beam blade approaches. It is also capable of operating underwater. In the TV version, the beam emitter is flexible and the beam emitted can take on other shape beside that of a scythe blade. Also, the beam scythe is stored in retracted form on the Gundam Deathscythe's rear skirt. In the Katoki Version, the beam emitter is fixed and cannot generate beam blade of other shape. Also, the beam scythe in this version is non-retractable and stored on the backpack.

In addition to its defensive capabilities, the buster shield can also be used as a close-range combat weapon. A beam blade can be emitted from the buster shield after the physical blades at the front split apart. The shield itself can even be launched towards its target thanks to the thruster at the back.

The nozzles protruding from the backpack scatter jamming particles which scramble the enemy's radar and cameras.

An additional weapon for the Katoki redesign, making its debut in Gundam Wing - Endless Waltz: The Glory of Losers. The Rousette equipment is a set of wings attached to Gundam Deathscythe's backpack, giving it a flight ability equal to that of XXXG-01W Wing Gundam.

Ultimately, once the Gundam pilots left to return to space, Duo was captured and his Gundam confiscated after losing a battle against several OZ-12SMS Taurus, as the Deathscythe was originally designed for land-based warfare, combined with that Duo also underestimated the Mobile Dolls. During a training mission, Trowa Barton, who had been disguised as an OZ officer, was ordered to destroy the already damaged Mobile Suit. With very little hesitation, Barton used a beam cannon to annihilate the Gundam. The Deathscythe was later rebuilt by the five Gundam scientists into the XXXG-01D2 Gundam Deathscythe Hell, which also included upgrading its equipment for space combat. 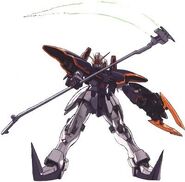 The early design of Gundam W Gundam, Gundam Deathscythe is the second from left 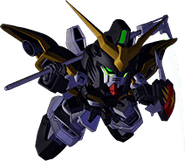 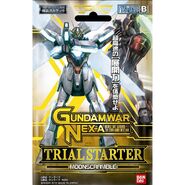 Retrieved from "https://gundam.fandom.com/wiki/XXXG-01D_Gundam_Deathscythe?oldid=364676"
Community content is available under CC-BY-SA unless otherwise noted.