A production model Mobile Suit developed by the Romefeller Foundation from data taken on the Gundam Deathscythe Hell. The Deathscythe Guilty retained much of its inspiration's focus, functioning as a covert stealth unit. One notable feature was the Prism Particle Coating, which bent light around the Gundam, that rendered the machine completely invisible and disrupted enemy sensors. The bat-like Active Cloak from the original Deathscythe Hell was transferred from the back to the hip armor, though what exact effect this had on its overall performance remains unknown. Deathscythe Guilty's only armaments were a set of standard head vulcans and a beam scythe of similar design to Deathscythe Hell's beam scissors.

An unknown number of Deathscythe Guilty units were produced up until January AC 196, all built at the Romefeller Foundation's secret mobile suit manufacturing plant on Colony X-18722. At least a single unit saw action; piloted by Semis, an OZ soldier loyal to Romefeller. It was used in an attempt to stop Tiel Noembreux and her friends and recover the stolen Gundams. However, Semis and fellow OZ soldier Dobert were ambushed by a member of Tiel's group who was piloting the stolen XXXG-01ST T'ien-Lung Gundam, severely damaging her Deathscythe Guilty and forcing her along with Dobert to break off the pursuit. When Tiel and her team finally reached the Graveyard of Soldiers, Semis reappeared, this time with her Gundam upgraded into the XXXG-01DG2 Gundam Deathscythe Guilty Custom. 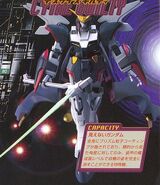 Retrieved from "https://gundam.fandom.com/wiki/XXXG-01DG_Gundam_Deathscythe_Guilty?oldid=439653"
Community content is available under CC-BY-SA unless otherwise noted.