A reconstructed and updated version of the Gundam Deathscythe that was destroyed by OZ, the Deathscythe Hell is also better adapted for space combat. Like its predecessor, the Deathscythe Hell is a mobile suit that specializes in stealth and close combat. The new active cloak armor mounted on the shoulders not only improve the suit's defense when closed, but also allow the suit to go invisible. When opened, the active cloak can enhance the Gundam's mobility. Duo Maxwell's favorite strategies is to use the Gundam's enhanced hyper jammers and its invisibility to sneak close to enemy units and catch them unaware. This tactic is usually good for taking out at least one or two enemy units, after which Duo will shut off the invisibility allowing his Gundam to be seen. The active cloak armor also serve to improve the suit's mobility, as they can function as wings when opened.

Deathscythe Hell's primary weapon is a beam scythe much like its predecessor. However, the new beam scythe has been upgraded from the original by adding a second beam scythe blade and a small rocket engine on the end. The second beam scythe gives the weapon a slightly greater reach, while the rocket engine increases the power of the swing, allowing Deathscythe Hell to cut through multiple enemy units with ease. The Deathscythe Hell's secondary weapon is a Buster Shield on the left arm which can launch from said arm to be used as a projectile weapon. The shield has two large metal blades that open just before launch to reveal a beam blade emitter within. Despite its upgrades, the Deathsycthe Hell lacks options for sustained ranged attacks. Although it retains the relatively weak head-mounted vulcans, the clavical-mounted machine guns featured in its original form were removed in order to allow room for the Active cloak. This leaves the Deathscythe Hell's Buster Shield as its only truly dependable ranged attack.

In combat, Duo Maxwell uses the same fighting style while piloting Deathscythe Hell as he did the original, however there is one significant difference. Duo seems in some cases less concerned about dodging enemy attacks. This is probably because Deathscythe Hell is equipped with a set of very durable active cloak armor which are strong enough to block multiple attacks from the beam cannons utilized by the Virgo mobile dolls. The Mobile Dolls also lack human reasoning, and thus are unable to properly assess the situation when set against the Deathscythe Hell and its sensor-jamming ability.

Hajime Katoki's redesigned version of Deathscythe Hell, its origin and history remains consistent with the TV series. In this version, the active cloak is mounted on the back instead of the shoulder and shaped like a bat's wings. However, the active cloak can still fold over the suit and have identical functions as the TV version. Another difference is that the upgraded beam scythe is known as beam scissors, it does not have any rocket engine and only has one beam scythe blade. This version of the Deathscythe Hell also has no buster shield, but retains the head vulcans and the hyper jammers. The hyper jammers now do not protrude out of the backpack, rather they seem to be integrated into the body.

Similar to the original Beam Scythe on the Deathscythe. However, the twin beam scythe features an extra beam emitter as implied by its name, and also a rocket thruster to give it extra momentum in use, effectively quadrupling the power of the original scythe. When not in use, the beam scythe is retracted and stored on a recharge rack on the backskirt. In the Katoki version featured in The Glory of Losers, the scythe also has the extra beam emitter, but it is fixed in place facing upwards and does not have the added thruster of the TV version, this version is called beam scissors.[1]

An improved version of the original Buster Shield, it has a coffin like motif on the exterior and two thrusters on the back with higher output. The beam blade emitted when the blades at the front split apart is also more powerful. In the Katoki version featured in The Glory of Losers, Deathscythe Hell now has two Buster Shields, but instead of being attached to the forearms, the Buster Shields are now repositioned to the side skirts.

Contains four field generators that function similarly to the Mercurius' planet defenders, they are used when the shoulder-mounted active cloak is closed. The force field is strong enough to repel shots from Vayeate or Virgo's beam cannons, and the armor itself is coated with an anti-beam coating. The active cloak also allows the Deathscythe Hell to turn invisible when closed, and can function as wings when opened, enhancing the suit's mobility. In the TV version, the armor is mounted on top of the shoulders, with two of them on each side, which will unfold upwards in a wing like fashion when opened. In the Endless Walts version, the armor is mounted on the back of Deathscythe Hell as a pair of large bat-like wings.

The nozzles protruding from the backpack scatter jamming particles which scramble the enemy's radar and cameras. Features twice the jamming power than that of the original Deathscythe.

When the XXXG-01D Gundam Deathscythe was captured and destroyed by OZ's forces in AC 195, the extremely durable gundanium-made remains of that mobile suit were taken to OZ's lunar base and mobile suit factory for storage. The five scientists who had built the Gundams plaguing OZ were also at the lunar base, captured and forced to develop new mobile suit technology to secure OZ's rule over Earth and the space colonies. Despite their apparent "cooperation," however, the scientists also began rebuilding the Deathscythe in secret, preparing for the day when captured Gundam pilot Duo Maxwell could return to the battlefield. That opportunity came when the Romefeller Foundation - the political force behind OZ - became split over a number of issues, and the "Treize Faction" of OZ attacked the lunar base, which at the time was still under the control of Romefeller loyalists. During the chaos, Duo managed to escape, taking his rebuilt XXXG-01D2 Gundam Deathscythe Hell to continue fighting on his own. At that time, the Deathscythe Hell was only seventy percent complete; Duo would later complete the suit on his own, bringing it up to its full combat potential. Using his new Gundam, Duo continued his fight against both the militaristic Romefeller Foundation and the radical civilian "White Fang" rebels. 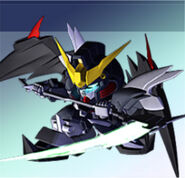