Snow White Prelude generally follows the design (including armaments) of its predecessor unit - the Wing Gundam Zero - though sporting an all-white aesthetic and expands its angel motif to the multi-winged Seraph with its adoption of an additional wing binder.

Six powerful beam rifle type weapons used by Snow White. They are upgraded versions of the Messer Zwergs, which were initially used by the Proto Zero in the Frozen Teardrop novel, as well as by Wing Gundam Zero during the close of the Eve Wars in the Glory of the Losers manga.. The Drei Zwerg is a combination of three of the Neue Zwergs. Although the Drei Zwerg can function on its own as a weapon, it can also be mounted on the twin buster rifle to increase its destructive power. This combined form is known as Drei Zwerg Buster. All six Zwergs can be combined to form the Drei Zwerg Doppelt, as well as on the Shield to form the Shield Zwerg. When not in use, they are stored on the Seraphim Binders.

Features anti-beam coating, and its tip can extend to puncture enemy MS armor similar to a real life piledriver. It possesses an aerodynamic shape to reduce air resistance in Neo-Bird Mode.[1]

A pair of small 4-barrel gatling guns housed on the clavicle section of Snow White. Primarily used when the twin buster rifle is either unavailable or unsuitable for the mission. Essentially, the machine cannons are larger versions of Vulcan guns. Because of their larger caliber, machine cannons can deal respectable damage (even destroy a Titanium Alloy-armored MS) and therefore see more use than Vulcans.[1] Unlike the other Gundams, Snow White's machine cannons are covered when not in use.

The two beam sabers are stored within the pylons that connect the two smaller wings to the back. One can be used as a reserve weapon, or both can be used simultaneously in a twin sword fashion. They possess enough power to compete with the Gundam Epyon's powerful beam sword, and can easily melt through even the toughest Gundanium Alloy. They are also capable of operating underwater much like the beam scythe of the Gundams Deathscythe and Deathscythe Hell.[2]

The search eye also gathers data that the cameras and antennas cannot. During combat, it instantly calculates the precise position, movement, and weak points of an opponent.

s:Snow White inherit the Wing Zero's ZERO System, a combat computer/pilot interface installed in the cockpit. The ZERO System connects directly with the mind of the pilot, flooding him with combat data and possible outcomes. This overload of data could allow the pilot to achieve total victory, but places great mental and emotional stress on the pilot. Those exposed to the ZERO (an acronym for Zoning and Emotional Range Omitted) System can become totally unstable, unable to tell the difference between friend and foe. Victims may even suffer mental breakdown or death. 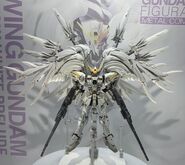