The Wing Zero was based on the Zero Frame technology developed by the five Gundam Scientists, which was an inner frame with all the necessary components for the mobile suit to operate, completely separate from the armor platings and energy conduits for weapons. The performance of the frame itself surpasses that of the OZ-00MS Tallgeese, and the complete separation of armor and internal structure allows the Wing Zero to continue fighting after losing up to 90% of its armor.[1]

In the Glory of the Losers manga, the Wing Zero is developed from the wreckage of the destroyed Wing Gundam Proto Zero, and upgraded with wing binders from the OZ-00MS Tallgeese Flugel. It combines the armament and equipment of the TV version and the EW version, such as having a shield and being able to transform into Neo-Bird Mode.

A double-barrel type Buster Rifle. It has more than twice the power of the Buster Rifle equipped by the Wing Gundam. In Neo-Bird Mode, it is equipped on both sides of the shield in a divided state. It is a type directly connected to the generator so rapid fire is also possible.

Slashing equipment for close combat. Since it adopts devices made of Gundanium Alloy in every part; the power, function, durability, etc are exceptionally improved compared to those of ordinary MS. One apiece is stored within the pylons that connect the two smaller wings to the Gundam's back.

Located on the shoulders, the two cannons are short to medium range weapons. They are capable of rapid fire thanks to internal drum structure. They are covered when not in use.

Used in the Glory of the Losers manga. It is developed by Howard when he finishes upgrading Wing Zero and the other Gundams for proper use in space. Like the Proto Zero's shield, it is made of Gundanium Alloy. In addition to being applied with anti-beam coating, it is equipped with Wing Vulcans on both sides. It becomes the nose in Neo-Bird Mode, having excellent aerodynamic performance in the atmosphere and also functions as a ram when charging.

When the Tallgeese Flugel is decommissioned, its four angelic-style wing binders are modified and repurposed onto the new Wing Zero. The two larger wings can be used as shields, as well as be used to protect the Gundam during atmospheric re-entry.

Featured in the Glory of the Losers manga, it is similar in appearance to the Proto Zero's Neo-Bird Mode with the exception of its wing binders. It was initially unusable until Howard equipped Wing Zero with its shield and used architecture backups to restore its lost systems. Was used multiple times during the Eve Wars.

A spherical booster unit that can be attached to Wing Zero for interplanetary flight. It is speculated that this unit was prepared for the Mars terraforming project.[1][2] During Mariemaia's Rebellion, this unit was used by Quatre to deliver the Gundam to Heero.

Like the other Gundams, Wing Zero was built to self-destruct should the pilot choose to. A remote detonator is placed within the cockpit and if a dire situation arrives, the pilot can destroy the Gundam. The system was designed to overload its power systems and has enough explosive power to destroy several city blocks. It's a last option tactic if the pilot is incapable of protecting the Gundam, while not allowing it to fall into enemy hands. It also can be used as one large explosive device to eradicate large targets.

An interface for achieving the "perfect victory", developed to make the pilot keep up with a machine performance that surpasses the Tallgeese. Since it seriously affects the physical functions and mental state of the pilot, a person without strong mental strength can't control it.

Glory of the Losers

Following the self-detonation of the Wing Gundam Proto Zero and the decommissioning of the Tallgeese Flugel, Mike Howard repaired and upgraded the Proto Zero into the Wing Zero, using the wing binders and other parts from the damaged Tallgeese Flugel to complete the modifications. Armed with the new Gundam, Zechs Merquise raced to Earth to defend the Sanc Kingdom. He was, however, drawn into battle against Heero Yuy in the Gundam Epyon. Both pilots, under the influence of the ZERO System of their respective fighters, recognized each other immediately and dueled fiercely. Neither pilot nor machine took any major damage, and after a clash, both Heero and Zechs were overcome with esoteric hallucinations caused by the ZERO System. Particularly, Zechs was troubled by what he interpreted as him destroying the Earth with Wing Zero. Because of this, the two pilots decided to switch Gundams, with Heero taking Wing Zero.

After the White Fang's rebellion in space began, Heero travelled with Wing Zero to OZ's Baikal Base in Siberia (where he had previously self-detonated the Wing Gundam) to steal transportation back into space. After eliminating the base's defense forces with ease, Heero was met by Sally Po and would journey into space alongside her with both Wing Zero and the Gundam Heavyarms she had recovered.

Later on, Heero would use Wing Zero to save a colony that was under attack by OZ. This very colony was where Trowa Barton, Catherine Bloom, and their circus troupe were visiting. Upon seeing Wing Zero, Trowa's instincts kicked in, alerting him to a danger he did not understand. However, Heero informed him that the Gundam Heavyarms was waiting for Trowa to use to save his troupe. Together, both Gundams fought off the occupying OZ forces, with Heavyarms taking a fair bit of damage.

After the battle, Wing Zero flew Heavyarms to the Peacemillion, where Howard and his crew repaired and upgraded the five Gundams for space combat. Wing Zero received a fine-tuned shield from the upgrade process, allowing it to transform into Neo-Bird Mode. With their newly repaired, upgraded, and resupplied Gundams, the G Team alongside Lucrezia Noin would then sortie to face the White Fang's mobile doll army of Virgo IIs. Part way through the battle, Heero noticed Zechs - now Milliardo - in the Gundam Epyon joining the battlefield, and left to go face him.

After clashing with Milliardo several times throughout the Eve Wars, Heero would eventually emerge victorious and go on to attempt to destroy the engine generator of Libra. However, Wing Zero's beam saber and machine cannons were spent and was without the Twin Buster Rifle, having been disarmed of it during the duel. Thus, leaving Heero with self-detonating Wing Zero as the only option. Before he could, Milliardo in the damaged Epyon showed up one last time, using the full power of the Strum und Drang Zweihander mode of Epyon to destroy the engines himself, and seemingly sacrificing himself so that Heero could live. Unfortunately, Epyon's sacrifice wasn't enough, as a large section of Libra was still falling to Earth. Chang Wufei in the Altron Gundam burst through the wall of the section Heero was in, carrying the dropped Drei Zwerg Buster Doppelt (Twin Buster Rifle equipped with two sets of Drei Zwerg). Heero then flew Wing Zero out in front of the Libra section plummeting toward the planet and destroyed it with the Drei Zwerg Buster Doppelt, saving the Earth.

A year after the end of the Eve Wars, four of the Gundams, including Wing Zero, were collected and sent towards the sun for disposal. When the Barton Foundation, led by Mariemaia Khushrenada, began to perform the original Operation Meteor, Quatre Winner set out to retrieve the four Gundams and sent Wing Zero to rendezvous in space with Heero, following his efforts to prevent the de-orbiting of Colony L3 X-18999.

After retrieving Wing Zero, Heero flew to Earth to save the kidnapped Relena Darlian. However, he was intercepted by Wufei in the Altron Gundam (who was on the side of the Mariemaia Army), and the two Gundams dueled each other above Earth's orbit. During the battle, Heero did not fight to his fullest extent (due to him believing the duel to be pointless) and Wing Zero received heavy damage from both Altron and the re-entry into Earth's atmosphere. Eventually, Heero gave up the fight and caused Wing Zero to sink into the ocean, at which point Wufei came to his senses. Sometime later, Wing Zero re-activated on its own and Heero decided to complete his mission.

Wing Zero arrived in the sky at Brussels, where the other Gundams were fighting, and Heero aimed the Twin Buster Rifle at the shield-protected Presidential Building where Mariemaia and her troops were hiding in. Heero fired the rifle three times and succeeded in destroying the bunker shields. However, due to its already badly-damaged state, the continuous recoil of the rifle (along with enemy fire from the compound below) proved too much for Wing Zero to withstand, causing the Gundam to start falling apart while firing the second shot and then exploding altogether while firing the third shot, though the remains of its torso crashed to the ground which allowed Heero to survive and climb out of the wreckage (although barely able to stand). After Mariemaia's surrender, the rest of the Gundams were also destroyed, along with all other mobile suits.

A customized Wing Gundam Zero that appears in Super Robot Wars DD piloted by Lelouch vi Britannia. It has the color scheme of the Knightmare Frames used by Lelouch. The color of Wing Zero Rebellion has been supervised by Hajime Katoki himself.

Sealed in capsule for disposal.

Using Beam Saber to defend against the Altron Gundam.

Clashing with Altron in Earth's orbit.

Damaged by the second shot's recoil.

Destroyed by the third shot's recoil.

With Drei Zwerg-equipped Twin Buster Rifle - Glory of the Losers

Charging at the Gundam Epyon - Glory of the Losers

Clashing with Epyon - Glory of the Losers

Firing at Libra - Glory of the Losers

In Neo-Bird Mode - Glory of the Losers 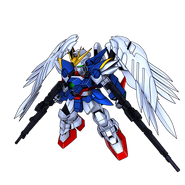 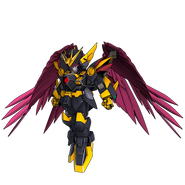