Log in to edit
watch 01:03
What is the Wing Gundam Zero?
Do you like this video?
Play Sound
Disambiguation:

The XXXG-00W0 Wing Gundam Zero was the first "Gundam" designed by the five engineers who had developed the OZ-00MS Tallgeese[1]. Around A.C. 175, the MS, which was developed as a "weapon" by OZ, began to evolve as an epoch-making mobile weapon based on the Tallgeese (Prototype Leo)[1]. Meanwhile, several engineers that were at the core of the Tallgeese development ran away from OZ to develop even higher performance MS[1]. Five of them gathered to develop a MS that would adopt "technology and materials that did not yet exist at that point in time", including "Gundanium", which was a cutting-edge material at that time[1]. Having been developed in light of the Tallgeese's failure, it became a dreadful machine equipped with an interface that transcended the limits of the pilot[1]. That is "Wing Zero", and the material adopted gave it the code name "Gundam"[1]. By transforming into Neo-Bird Mode, high-speed cruising is possible; in addition, the Twin Buster Rifle has the power to destroy a space colony in a single hit[1].

The Wing Gundam Zero's head unit is an aggregation of various sensors and head Vulcan Guns are not equipped[1]. Its chest unit is equipped with the main generator and a "Zero System" built-in type cockpit[1]. The Zero System also turned out to be what the five engineers feared the most as it forced the pilot to achieve the "perfect victory"[1]. The five engineers, harboring a fear of the dimension of Wing Zero's excessive destruction coefficient (in practice, the parts with the required specifications could not have been supplied at that point in time), suspended the machine's development and sealed its design data[1]. In hiding, the five engineers who had returned to their respective base colonies would develop five "Gundams" that could be said to be unique Wing Zero-derived machines[1]. And then in A.C. 195, the seal was broken by Quatre Raberba Winner, one of the five Gundam pilots who had carried out Operation Meteor; and Wing Zero, which had been impossible to build at the time of its design, is born[1].

A double-barrel type Buster Rifle[1]. It has more than twice the power of the Buster Rifle equipped by the Wing Gundam[1]. In Neo-Bird Mode, it is equipped on both sides of the shield in a divided state[1]. It is a type directly connected to the generator so rapid fire is also possible[1].

Slashing equipment for close combat[1]. Since it adopts devices made of Gundanium Alloy in every part; the power, function, durability, etc. are exceptionally improved compared to those of ordinary MS[1]. One apiece is stored in the shoulder armor on both shoulders[1].

Two large-caliber Machine Cannons are equipped on both shoulders[1].

A shield made of Gundanium Alloy[1]. In addition to being applied with anti-beam coating, it is equipped with Wing Vulcans on both sides[1]. It becomes the nose in Neo-Bird Mode, having excellent aerodynamic performance in the atmosphere and also functions as a ram when charging[1]. The tip of the shield can also be extended to damage targets.

An interface for achieving the "perfect victory", developed to make the pilot keep up with a machine performance that surpasses the Tallgeese[1]. Since it seriously affects the physical functions and mental state of the pilot, a person without strong mental strength can't control it[1].

Wing Gundam Zero was initially created by the five Gundam Scientists around AC 180. However, the Scientists, fearing the potential power of Wing Zero, halted development and each took a copy of the design to create their own mobile suits for the eventual Operation Meteor.

In AC 195, Quatre Raberba Winner discovered a copy of the blueprints following his father’s death, and used his resources to construct Wing Zero to replace his then-destroyed Gundam Sandrock.[2] After it was completed, Quatre, driven mentally unstable from the combination of his father's death and exposure to the ZERO System, began attacking space colonies affiliated with OZ.[3] Heero Yuy and Trowa Barton (both working for OZ, the former unwillingly) were sent to take on Quatre and Wing Zero. Wing Zero proved incredibly powerful, destroying the OZ escort mobiles suits and heavily damaging the OZ-13MSX1 Vayeate. However, the pair did return Quatre to normalcy, although in the process Heero and Quatre were captured by OZ, and Trowa was declared MIA.

After falling into the possession of OZ, Trant Clark forced Heero to test the ZERO System, but after using the machine to go on a rampage caused by the ZERO System, he and Quatre escape and returned to Earth. [4] Trant retained Wing Zero, and after finding Gundam pilot Duo Maxwell, forced him to test it. Duo was overwhelmed by the ZERO System but returned to normal after abandoning Wing Zero for his Gundam Deathscythe Hell. After Duo escaped, Trant attempted to fight Duo with Wing Zero, but ultimately ended up dying in the process.[5]

After the loss of Trant, OZ planned to destroy the Gundam, but the intervention of Zechs Merquise, who sacrificed his Tallgeese in order to claim Wing Zero for himself foiled their plans.[6] Later, Zechs confronted Chang Wufei, at first attempting to become the Gundam pilot's ally, but the effects of the ZERO System and Wufei's hostility forced him into conflict. [7] He then used Wing Zero to return to Earth in an attempt to prevent the dissolution of the Sanc Kingdom, but arrived too late and ended up fighting Heero, who was piloting the Gundam Epyon. After their duel ended in a draw, they exchanged Gundams before parting ways, leaving Heero with Wing Zero.[8]

Heero and Wing Zero return to space[9], and during the journey, encountered Wufei, who used Wing Zero to destroy a force of forty Virgo II mobile dolls. In the process, the Zero System allowed Wufei to discover his true enemy and he decided to join the Gundam Team. [10] The recently found and still amnesiac Trowa later piloted Wing Zero to liberate a colony threatened by OZ soldiers. While using the ZERO System, Trowa regained the memories that he lost after his near-death experience.[11]

During the Eve Wars, Heero used the Gundam in a duel against Epyon, defeating Zechs, before using Wing Zero's Twin Buster Rifle to intercept and destroy the remains of the Libra battleship before it could impact with Earth. [12] 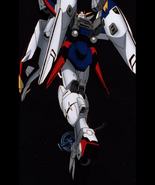 Back and wing thrusters

In front of a space colony

Kneeing as Quatre tends to Heero

Neo-Bird Mode flying in the atmosphere