The XMS-005 Thieleva (ティエルヴァ, Tieruvua?) is a variant of the Earth Federation Forces's WMS-GB5 G-Bouncer. Featured in the Three Generations Arc of Mobile Suit Gundam AGE, it is piloted by Girard Spriggan.

The Thieleva is a MS developed by the Madorna Workshop for the Earth Federation Forces' X-Rounders.[1] Using the same frame as the WMS-GB5 G-Bouncer, it is completed using data from the G-Bouncer Deos. It has a similar head unit as the G-Bouncer Deos, but with protrusions on both sides of the head, an additional large antenna at the centre, and an improved sensor system with its twin-eye cameras protected by a visor.

The Thieleva uses the same DODS Rifle as the G-Bouncer and G-Bouncer Deos as its primary ranged combat armament. It can be stored on the rear waist when not in use.

The Thieleva's main close combat armament, two are stored in the side skirt armor and they emit a beam blade during use.

A defensive armament, it is the same shield as the one used by G-Bouncer Deos and can withstand both physical and beam attacks.

A pair of remote-controlled weaponry stored on the Thieleva's back and usable only by X-Rounders. When deployed, they allow the Thieleva to perform all-range attacks and can be used for both ranged and close combat. For ranged combat, the blades at the front of the bits open up, allowing beams to be fired from an emitter at the center. For close combat, the blades can spin at a high speed like a drill for piercing through enemy machine. The bits can also be thrown like a spear at the enemy, and can serve as thrusters when attached to the Thieleva.

For more information on the Thieleva's history, please go to Girard Spriggan page.

With DODS Rifle and Shield 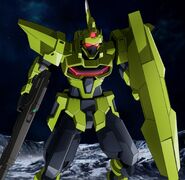 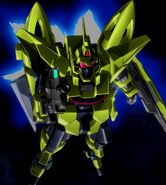