XMF-P192P Proto-Chaos is a prototype mobile armor featured in the original design series SEED DESTINY-MSV and made an appearance in the manga Gundam SEED Destiny Astray. The unit is piloted by Courtney Heironimus.

Impressed by the performance of the GAT-X303 Aegis Gundam's mobile armor (MA) mode, ZAFT created the Proto-Chaos to re-evaluate the combat usefulness of MA, which they previously thought was no longer useful. After this, the non-transformable Proto-Chaos was used in the development of the ZGMF-X24S Chaos Gundam. The Proto-Chaos looks nearly identically to the Chaos' MA mode with the main difference being the addition of two mobile weapon pods in place of the Chaos' MS mode arms.

Weapons wise, the Proto-Chaos is armed with two beam claws and four mobile weapon pods, and both weapons are the same as those used by Chaos. The MA does not have the Chaos' head-mounted multi-phase beam cannon, instead, a monoeye sensor and the unit's cockpit are mounted in its place. The Proto-Chaos can fly in a 1G environment like the Chaos, in fact, due to the presence of two additional mobile weapon pods, it has higher propulsion power and remains pilotable in extremely high G environment.

The Proto-Chaos was created by ZAFT at an unknown point of time after the First Alliance-PLANT War to re-evaluate the combat usefulness of Mobile Armors. In all, six units were produced, three of which were damaged beyond repair due to the high G tests they were subjected to. The remaining three Proto-Chaos were repaired and later used for the development of the ZGMF-X24S Chaos Gundam. When the finished Chaos was stolen by Earth Alliance pilot Sting Oakley, Courtney Heironimus went out with one of the Proto-Chaos and fought against two GAT-SO2R N Dagger N in space. 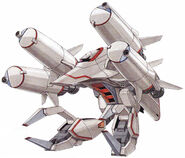 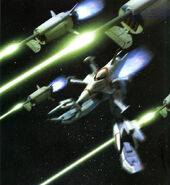 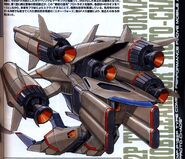