The XMA-02 Ebirhu Doga is a prototype newtype-use Mobile Armor developed by the Crossbone Vanguard. It only appears in the SD Gundam G Generation games.

After the chaos of the Second Neo Zeon War, the Earth sphere was littered with much debris from Axis and the countless mobile suits destroyed in the final battle. The Buch Concern stepped in and accepted a contract to clean up the debris, but the Earth Federation was unaware that the group's leadership had its own plans for the future. Recovering the remains of the NZ-333 α Azieru , the Buch Concern successfully reverse-engineered its psycommu technology, which was combined with the data from the Den'an-type mobile suits to produce the XMA-02 Ebirhu Doga. Bearing a similar design philosophy to the XMA-01 Rafflesia, the Ebirhu Doga was intended to execute the Crossbone Vanguard's plan to create Cosmo Babylonia. To this end, the Ebirhu Doga was equipped with a supply of Bugs, the remote-controlled killing machines that devastated Frontier Side's population. Its main weaponry consisted of a large mega particle cannon and funnels, controlled using a Psycommu system based on the α Azieru's data.

The death of Carozzo Ronah threw the Babylonia plan into disarray, and the Ebirhu Doga was never used. 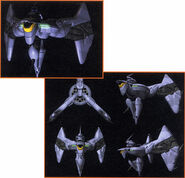 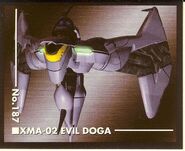 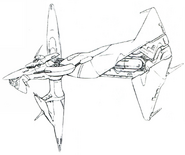 Retrieved from "https://gundam.fandom.com/wiki/XMA-02_Ebirhu_Doga?oldid=444007"
Community content is available under CC-BY-SA unless otherwise noted.