The Ghost Gundam is the repaired form of the EMS-TC02 Phantom Gundam using parts from the X1, X2 and XM-X0 Crossbone Gundam X-0 salvaged from the SNRI supply ship. Anti-beam coating has been applied to the entire body with rare metal discovered from outer space exploration. This beam coating also functions as reactive armor to protect against live ammunition. The Ghost Gundam is capable of using the Phantom Light continuously through several forced cooling cartridges that are mounted like an ammunition belt.

A replica of the Crossbone Gundam X-0's Butterfly Buster, although it is built with current technology which results in a higher output.

A powerful high output beam saber which utilizes the Phantom Light. By "flushing" the I-field against a beam shield or beam saber, the Flame Sword can destroy the I-field that holds the shape of the defending weapon. It can also be used as a heat sword by heating the device without generating the beam.

The flame sword sheath mounted on each side of the waist was modified so it can be used as a beam rifle. This beam rifle, called a flame rifle, converges the I-field and treats it as a barrel, and the trajectory of the beam is bent irregularly under the influence of the I-field that can not converge, so as a pure shooting armament it is a defective product. However, the unpredictable orbital beam is also suitable for causing confusion and upset of enemies and opening up dense enemy groups.

A new weapon that integrates the functions of the Muramasa Blaster and the Peacock Smasher into a single weapon. It can switch between the Buster Mode for close combat and the Smasher Mode for ranged combat.

The Phantom Gundam was repaired with spare parts, resulting in the Ghost Gundam, after it was greatly damaged while preventing a nuclear attack by the Zanscare Empire. 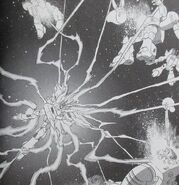 Simultaneous shooting
Add a photo to this gallery

Retrieved from "https://gundam.fandom.com/wiki/XM-XX_Ghost_Gundam?oldid=475097"
Community content is available under CC-BY-SA unless otherwise noted.