Following the loss of its Core Fighter, the XM-X2 Crossbone Gundam X-2 was modified on the Jupitris 9 using the technology of the Jupiter Empire, with the missing components filled in based on data from the X-2's onboard computer and observed combat data. The back thruster of the X-2 Kai is larger compared to its predecessor, but its thrust is roughly the same as the original. This can be attributed to the differences in the Jupiter Empire's technology as well as their efforts to reproduce a machine they were not familiar with. The loss of the Core Fighter has another more obvious disadvantage; in the final showdown with Kincade Nau's XM-X1 Crossbone Gundam X-1 Kai, the X-2 Kai was critically damaged and pilot Zabine Chareux was unable to escape its destruction.

These head-mounted shell firing weapons have a high rate of fire, but little power and are generally ineffective against mobile suits. However, they can damage lightly armored areas such as the sensors and are ideal for shooting down small, lightly armored targets such as missiles, small vehicles, etc.

The beam saber is the standard close-combat weapon of many mobile suits, it emits a blade of plasma contained by an I-field that can cut through any physical armor not treated to resist it. Two beam sabers are stored in X-2 Kai's shoulder racks.

The beam shield generates a plane of energy similar to the blade of a beam saber which is capable of blocking both beams and physical weapons. This plane is divided into multiple sections, which can be turned on or off as needed to conserve energy. Individual sections are also automatically deactivated whenever they're in danger of coming into contact with the mobile suit itself. The beam shield generators of the Crossbone Gundams are mounted on the forearm, and can take advantage of beam energy malleability, forming four short beam blades at the corners of the beam shield generator that meet at the center, which gives the brand marker as a whole a pyramidal shape. The brand marker slides over the fist of the mobile suit and is used as a punching weapon. When used, the the brand marker leaves an X-shaped hole, if the target area isn't completely destroyed.

A high powered beam weapon modified from the original X-2's buster launcher by the Jupiter Empire, it is capable of destroying Federation warships in one shot.

The buster gun is the primary ranged weapon of the Crossbone Gundam. This beam pistol is modeled after a flintlock pistol and is typically used with only one of the mobile suit's hands, leaving the second hand free to use a melee weapon. Stored on the right side armor when not in use, the buster gun can combine with the beam zanber to form the zanbuster.

A close range weapon pioneered by the original Crossbone Vanguard during the Cosmo Babylon Wars, it is designed for combat in and around space colonies, where beam weapons would run the risk of triggering catastrophic reactor explosions in enemy mobile suits. Instead, the shot lancer uses electromagnetic acceleration to drive its tip through the enemy's armor, and the spearhead itself can also be launched like a missile.

The shot lancer used by the X-2 kai has four heavy machine guns.

Thanks to Minovsky particle interference, warfare in the Universal Century era relies heavily on visual sensors, which can be tricked by inflatable decoys that mimic mobile suits, asteroids, and even warships. More sophisticated varieties are equipped with small maneuvering verniers, allowing them to move in a realistic manner and register on infra-red sensors. The dummy launchers mounted in the XM-X2 Kai's hands can deploy several dummies in the shape and color of the mobile suit. With these dummies, the Gundam can confuse an enemy long enough to get close to use its weapons.

Like its brother units, the X-2 Kai can temporarily "Open Face" to release Heat and increase performance. This allows the X-2 Kai to perform otherwise extremely demanding maneuvers or attacks that would normally be considered impossible.

When Jupiter Empire leader Crux Dogatie staged a "sporting" fight between the XM-X2 Crossbone Gundam X-2 and the young pilot Tobia Arronax, he hadn't counted on Tobia managing to hijack the X-2 and using its Core Fighter to escape. Left without a cockpit, the Jupiter Empire had to modify the X-2 so that the traitorous Zabine Chareux could pilot it again. After completing the ritualistic torture that the Jupiter Empire put him through, Zabine's first act with the new X-2 Kai was to frame his former allies. As the Mother Vanguard was surrounded by Earth Federation battleships, Zabine attacked, making the Federation think that Berah Ronah (aka Cecily Fairchild) had hostile intentions and setting off a full-scale battle. After allowing Kincade Nau (aka Seabook Arno) to exhaust himself fighting the Federation's Gundam F91s, Zabine came in to finish off his hated rival. However, a near-miss with his beam saber, Kincade's ingenuity and SNRI's medical care resulted in Kincade's return to the battlefield some months later. Zabine attacked him once again, but Kincade gained the upper hand and finished Zabine by stabbing a heat dagger into X-2 Kai's cockpit, destroying the Gundam. 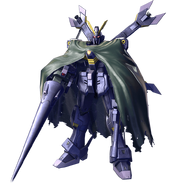 From Gundam Extreme Versus 2
Add a photo to this gallery 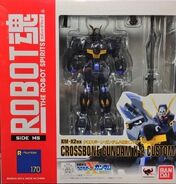 Retrieved from "https://gundam.fandom.com/wiki/XM-X2ex_Crossbone_Gundam_X-2_Kai?oldid=433604"
Community content is available under CC-BY-SA unless otherwise noted.