Following a fierce battle with the Jupiter Empire's Death Gale Squadron, the XM-X1 Crossbone Gundam X-1 was badly damaged. During its repair, the Crossbone Vanguard engineers took the opportunity to give the machine a slight upgrade as well. This change consists primarily of the addition of the screw whip, stored in the rear skirt armor. Designed to counter the EMS-VSX1 Quavarze's snake hands, the screw whips are not as powerful as the snake hands but are still effective weapons. However, the scissor anchors of the original X-1 had to be removed as the storage space for their chains was needed to house the whips.

The Crossbone Gundams are also equipped with two heat daggers as alternative close combat weapons. Unlike most heat weapons, the blade of the heat dagger is heated using leftover heat from the leg's thrusters. The heated blade can melt the enemies armor on contact. The heat daggers are stored in the legs, one in each calf. Normally, it is handheld when in use, but it can also slide out of the sole as a surprise attack.

A handheld whip-like weapon with a sharp crown-like tip that can rotate rapidly like a drill to increase its penetration power, it is designed to counter the EMS-VSX1 Quavarze's snake hands. A pair of screw whips are stored in the rear skirt armor, causing the removal of the scissor anchors of the original X-1 as that is where the latter weapon's chains are stored.

As with other Crossbone Vanguard mobile suits used in the year UC 0133, the X-1 Kai could be equipped with a cloth cloak that had been treated with an anti-beam coating. Functioning similar to the old physical shields that had received the same treatment, the cloak was used to protect the mobile suit from beam shots. With its size it could completely cover the mobile suit, with the exception of the head, providing full body protection. However, despite its advantages, one of which is conserving power, the cloak has two disadvantages. First, unlike a beam shield the cloak can only handle about 5 shots before the coating wears off, rendering the cloak to simple cloth. The second disadvantage is that the cloak offers no protection from physical weapons.

Thanks to Minovsky particle interference, warfare in the Universal Century era relies heavily on visual sensors, which can be tricked by inflatable decoys that mimic mobile suits, asteroids, and even warships. More sophisticated varieties are equipped with small maneuvering verniers, allowing them to move in a realistic manner and register on infra-red sensors. The dummy launchers mounted in the XM-X1 Kai's hands can deploy several dummies in the shape and color of the mobile suit. With these dummies, the Gundam can confuse an enemy long enough to get close to use its weapons.

Like its brother units the X-1 Kai can temporarily "Open Face" to release Heat and increase performance. This allows the X-1 to perform otherwise extremely demanding maneuvers or attacks that would normally be considered impossible.

After returning to battle, Kincade Nau and Crossbone Gundam X-1 Kai were able to defeat the Death Gale Team. However, Kincade is forced into battle against the Earth Federation's mass-produced F91 Gundam F91 units, as well as being attacked by his former ally, Zabine Chareux. The heavily damaged X-1 Kai is overpowered by Zabine's XM-X2ex Crossbone Gundam X-2 Kai, and is sent hurtling into the Earth's atmosphere. Several days after the battle, Kincade and the X-1 Kai reappear just in time to help Tobia Arronax's XM-X3 Crossbone Gundam X-3 repel the Death Gale Team on Earth. After reuniting with the Crossbone Vanguard, Kincade goes on to destroy the massive Jupitris 9 and deal the deathblow to Crux Dogatie's EMA-10 Divinidad by using the screw whips to pierce the heavily armored cockpit. After the first Jupiter Conflict ends, Kincade entrusts the X-1 Kai with Tobia. A few years later, The X-1 Kai would be modified once again, into the "Skull Heart". 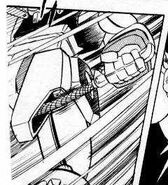 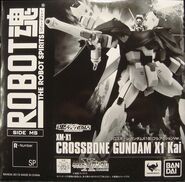