A custom Gunpla built and controlled by the European Junior Gunpla Battle champion, Lucas Kankaansyrjä; it is hailed by Wilfrid Kijima as the greatest Gunpla in the Japanese U-19 Gunpla Battle tournament. Besides having a different color scheme from the original Crossbone Gundam X-1 Full Cloth, this well-built Gunpla also has a fully functioning Core Fighter, which is omitted in the original HG model kit, and is modified to have better control over Plavsky Particles.

Like its base machine, the Crossbone Gundam X-1 Full Cloth Type.GBFT has powerful thrusters and a large array of weaponry, hence it is capable of handling multiple enemy units simultaneously. The Peacock Smasher and the chest-mounted Mega Machine Cannons have been improved, the former has better aiming capability while the latter has a new ability to blind enemy units.

The main flaw of this Gunpla is that its high performance requires the consumption of a large amount of Plavsky Particles, so it must end the battle fast or be resupplied by its allies such as the AMS-119［C］ Geara Doga ［C］. The trump card of this Gunpla is the 'Full Mode', which when activated grants the unit increased power for a short time.

A sword-like beam weapon that is used for close combat, the Crossbone Gundam X-1 Full Cloth Type.GBFT is equipped with a pair of them and they are stored in the shoulder racks when not in use. They also serve as the beam guns for the core fighter.

Mounted on each forearms, the beam shield can block both beam and projectile weapons.The beam shield generates a plane of energy similar to the blade of a beam saber. This plane is divided into multiple sections, which can be turned on or off as needed to conserve energy. Individual sections are also automatically deactivated whenever they're in danger of coming into contact with the gunpla itself. The beam shield generators of the Crossbone Gundams can further take advantage of beam energy malleability, forming four short beam blades at the corners of the beam shield generator that meet at the center, which gives the brand marker as a whole a pyramidal shape. The brand marker slides over the fist of the gunpla and is used as a punching weapon. When used, the the brand marker leaves an X-shaped hole, if the target area isn't completely destroyed.

The buster gun is an optional ranged weapon of the Crossbone Gundam X-1 Full Cloth Type.GBFT. This beam pistol is modeled after a flintlock pistol and is typically used with only one of the gunpla's hands, leaving the second hand free to use a melee weapon. Stored on the right hip when not in use, the buster gun can combine with the beam zanber to form the zanbuster.

Another close combat weapon, the heat dagger is unlike most heat weapons as its blade is heated using leftover heat from the leg's thrusters. The heated blade can melt the enemies armor on contact, which when combined with the force applied to the attack, can inflict significant damage. The heat daggers are stored in the legs, one in each calf. Normally, it is handheld when in use, but it can also slide out of the sole as a surprise attack.

A pair of fire-linked mega machine cannons in the chest-mounted skull motif, they are more powerful than the head-mounted vulcan guns. Crossbone Gundam X-1 Full Cloth Type.GBFT's mega machine cannons have been modified, they can release a bright flash to blind an enemy unit in close range.

A sword-like weapon with a gun handle in the guard and with a skull and crossbones painted on the sides. The Muramasa Blaster is quite large, at least half the length of the Gundam's height if not longer. The Muramasa Blaster mounts a total of 15 beam emitters, one beam gun on the end (or tip of the sword) that can also emit a beam saber and 14 beam blade emitters that line the sides, making it a weapon that can be used for both long range and short range combat.

This crossbow-like weapon mounts nine separate beam guns which can be fired in any arrangement, but simultaneous use drains its energy and requires the replacement of the barrel parts. Crossbone Gundam X-1 Full Cloth Type.GBFT's peacock smasher is modified to allow the nine beam guns to be aimed individually.

A pair of scissor anchors are stored in the front right skirt armor, they are attached to the Gundam by long chains and uses a scissor claw to grip objects. While this is not an offensive weapon per-say, it provides several uses in combat. It can be used to grip the limb and an enemy machine to ensnare it or to reel it in closer to the Gundam where it is within melee combat range. It can also be used to turn ensnared gunpla into bludgeoning weapons by pulling on the chain. The scissor anchor can also be used to stabilize the Gundam's footing in case of emergencies, such as when fighting the wind force of an explosion.

Two skull head units can be mounted on the Crossbone Gundam X-1 Full Cloth Type.GBFT's shoulders, each featuring a pair of I-field generators identical to the XM-X3 Crossbone Gundam X-3's, which if used effectively can grant the unit total protection from enemy beam attacks. The skull head units can also be worn over the arms, the I-fields serving to protect Full Cloth while it charges forward to attack.

These head mounted shell firing weapons have a high-rate of fire, but have little power and are generally ineffective against gunpla; however, the vulcan gun can damage lightly armored areas such as the sensors. These weapons are ideal for shooting down small, fast moving, lightly armored targets such as missiles or small vehicles.

The additional armor covering the unit's body consisted of Crossbone Gundam's Anti-Beam Coating mantle overlain on a framework of thrusters. As a result, the "Full Cloth" unit provides the Crossbone Gundam X-1 Full Cloth Type.GBFT with enhanced beam defense and acceleration. The individual sections of the armor are movable, allowing the gunpla to engage in close combat without any trouble, and can be jettisoned when required (e.g. when worn out).

A special mode whereby the unit will release all of its stored Plavsky Particles for a power boost beyond its normal performance limit. However, as this mode uses up the particles quickly, it can last for only a short time and it also places added stress on the unit. 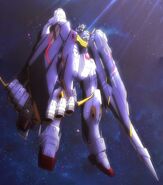 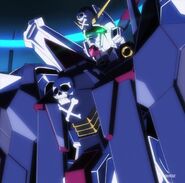 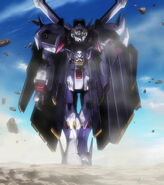 After the battle with Transient Gundam (Ep 21)

Gunpla after the match (Ep 22)

Retrieved from "https://gundam.fandom.com/wiki/XM-X1_Crossbone_Gundam_X-1_Full_Cloth_Type.GBFT?oldid=433382"
Community content is available under CC-BY-SA unless otherwise noted.