An upgrade of XM-X1 Crossbone Gundam X-1 "Patchwork". As it turns out that the SNRI can no longer supply the Crossbone Vanguard anymore, all remaining parts are used to make the Full Cloth upgrade.

These head mounted shell firing weapons have a high-rate of fire, but little power and are generally ineffective against mobile suits. However, they can damage lightly armored areas such as the sensors, and are ideal for shooting down small, lightly armored targets such as missiles or small vehicles.

The Crossbone Gundam X-1 Full Cloth is equipped with a pair of fire-linked mega machine cannons in chest-mounted skull motif, and they are more powerful than the vulcan guns.

Beam sabers are close combat weapons that emit a blade of plasma contained by an I-field that can cut through any physical armor not treated to resist it. The Crossbone Gundam X-1 Full Cloth is equipped with two beam sabers stored in shoulder racks when not in use. They also serve as the beam guns for the core fighter.

An alternative close combat weapon, the heat dagger is unlike most heat weapons as its blade is heated using leftover heat from the leg's thrusters. The heated blade can melt the enemies armor on contact, which when combined with the force applied to the attack, can inflict significant damage. The heat daggers are stored in the legs, one in each calf. Normally, it is handheld when in use, but it can also slide out of the sole as a surprise attack.

The Crossbone Gundam X-1 Full Cloth is equipped with a scissor anchor stored on the front right skirt armor. This anchor is attached to the Gundam by long chains and uses a scissor claw to grip objects. While this is not an offensive weapon per-say, it provides several uses in combat. It can be used to grip the limb of an enemy machine to ensnare it, or to reel it in closer to the Crossbone Gundam for melee combat. It can also be used to turn ensnared mobile suits into bludgeoning weapons by pulling on the chain. The scissor anchor can also be used to stabilize the Gundam's footing in case of emergencies, such as when fighting the wind force of an explosion.

A sword-like weapon with a gun handle in the guard and with a skull and crossbones painted on the sides. The Muramasa Blaster is quite large, at least half the length of the X-1 Full Cloth's height if not longer. The Muramasa Blaster mounts a total of 15 beam emitters, one beam gun on the end (or tip of the sword) that can also emit a beam saber and 14 beam blade emitters that line the sides, making it a weapon that can be used for both long range and short range combat. Unfortunately the Muramasa Blaster is a prototype weapon and because of its power intensive nature it can only be used for a limited operational period. When not in use the weapon is stored on the left hip.

The cloak-like armor is made from the remaining ABC mantle overlain on a framework of thrusters. It provide heavy defense and thrust. Parts of the armor can be moved out of the way when engage in melee combat.

Two skull head units are mounted on the Crossbone Gundam X-1 Full Cloth's shoulders, each featuring a pair of I-field generators which if used effectively can grant the unit total protection from enemy beam attacks. The skull head units can also be worn over the arms, the I-fields serving to protect Full Cloth while it charges forward to attack. 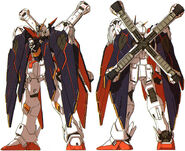 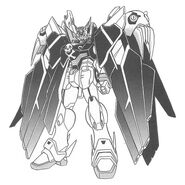 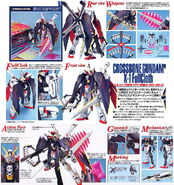 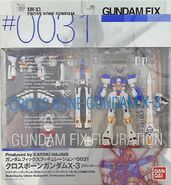 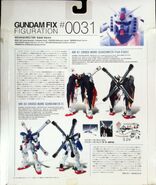 Retrieved from "https://gundam.fandom.com/wiki/XM-X1_Crossbone_Gundam_X-1_Full_Cloth?oldid=427952"
Community content is available under CC-BY-SA unless otherwise noted.