The main armament of Crossbone Gundam X-1 Full Armor is the Muramasa High Buster, a multi-purpose weapon similar to XM-X3 Crossbone Gundam X-3's Muramasa Blaster but has higher power output and powered by a sub generator in the right shoulder. On the left shoulder is a large shield with a pair of pile bunkers, also linked to a sub generator on the left shoulder. Crossbone Gundam X-1 Full Armor's shins are also reinforced with extra armor with a pile bunker on each knee. The head is modified to mount a pair of external vulcan guns. Finally, it can equip propellant tanks to its hip armors.

Although the Crossbone Gundam X-1 Full Armor is powerful, the modification is rather crude due to Umon Samon's inexperience engineering skill. Notable, the Muramasa High Buster is connected to the sub generator with external power cords, which leaves them exposed to attack. Although the weapon is still functional when powered by standard hand plug, its power will be greatly reduced.

In the alternate events of Super Robot Taisen Dai Gaiden, Umon Samon has retired from an active pilot role and instead works as the Crossbone Vanguard's field engineer. Using his experience as its temporary pilot, Umon upgrades the XM-X1 Crossbone Gundam X-1 without input from the SNRI. 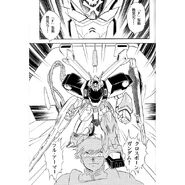 Retrieved from "https://gundam.fandom.com/wiki/XM-X1_Crossbone_Gundam_X-1_Full_Armor?oldid=433364"
Community content is available under CC-BY-SA unless otherwise noted.