Developed in collaboration with the Jovian colonies, the Crossbone Gundam X-13 was designed to reduce production costs. The data of the Crossbone Gundam X-0 was used during its development, and the resulting unit is a very close replication of the X-0. Beam weaponry has been replaced with live-ammunition guns, and the beam shield/brand marker has been omitted as it was deemed non-essential. To further reduce costs, the X-13 also has external power pipes, similar to early Zeon MS.

A parrot-type small mecha that operates as a psycommu missile.

Developed in conjunction with the Jovian colonies, the X-13 is a reproduction of the X-0 with cost-cutting design changes. The design of the Crossbone Gundam, a high-performance previous generation MS, is relatively easy to reproduce despite the deterioration of MS technology in the Space Warring States Era. Its brother units, the X-11 and X-12, were also produced during the X-13's development. The X-11 was meant to be as close to the X-0 as possible, while the X-12 was designed to reduce costs. The X-13 has reduced costs significantly as well, but is still about 30% higher than the target cost, and thus still needs time for redesign before it can be produced in higher numbers. 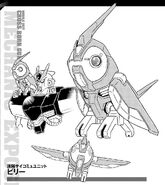 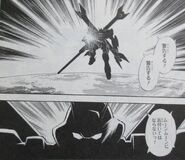 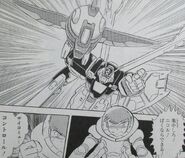 Retrieved from "https://gundam.fandom.com/wiki/XM-X13_Crossbone_Gundam_X-13?oldid=446786"
Community content is available under CC-BY-SA unless otherwise noted.