The original 3rd unit of SNRI's F97 series, the Ghost like its siblings was developed for operating around Jupiter. Assembled later than the X-1 and X-2 in U.C.0132, it did not reach the Crossbone Vanguard's flagship, the Mother Vanguard, as its transport ship was destroyed in an unknown accident. Laying dormant in space for 20 years, it is found by Curtis Rothko after a long search. It is given the formal code 'X-0' by the Manzana Flor and Font Baud names it 'Ghost', as it is a Crossbone Gundam that most did not know existed.

The Ghost shares the same specs as X-1 and X-2 and retains the Anti-Beam Coating cloak, which can be stored in the back and unfolded when needed. When unfolded, it covers the mobile suit's entire body and dispersed beam energy over the cloak. It could usually withstand five standard beam shots without spending any energy, with the additional advantage of stealth. This is particularly effective when the Fog has been dispensed due to its ability to enhance the stealth aspect of the Ghost.

Unlike the other units, the Ghost is equipped with the Specialized Sound and Headphones Sensor System. This system allows Curtis to listen more closely to the battlefield, enabling him to pilot by sound through intense practice and remembering certain sounds that mobile weapons make. However, this doesn't compensate fully for his loss of sight. Curtis has to inquire about the shape of new and unknown mobile weapons that he and the database within the Ghost aren't familiar with so that he can better imagine what it looks like through the sounds he hears.

It has different antennae and body heat ducts from the other units. The new body heat duct is supposed to be more effective at cooling, but the effect is unnoticeable in practice. It also uses the experimental weapon Butterfly Buster instead of the usual Beam Zanber and Buster Gun of the other Crossbone Gundams. Although designed as a high performance mobile suit, 20 years of technology advancement in mobile weapon technology mean the X-0 is roughly on par with the ZM-S06S Zoloat in term of performance.

The beam saber is the standard close-combat weapon of many mobile suits, it emits a blade of plasma contained by an I-field that can cut through any physical armor not treated to resist it. The Crossbone Gundam is equipped with two beam sabers stored in shoulder racks when not in use. They also serve as the beam guns for the core fighter.

An alternative close combat weapon, the heat dagger is unlike most heat weapons as its blade is heated using leftover heat from the leg's thrusters. The heated blade can melt the enemies armor on contact. The heat daggers are stored in the legs, one in each calf. Normally, it is handheld when in use, but it can also slide out of the sole as a surprise attack. Naturally, the fog dispensers also increase the effectiveness of this weapon as well due to the surprise factor.

A replica of the Butterfly Buster, but built with current technology and thus has higher output.

A new weapon that integrates the functions of the Muramasa Blaster and the Peacock Smasher into a single weapon. It can switch between the Buster Mode for close combat and the Smasher Mode for ranged combat.

A cloth cloak treated with an anti-beam coating that is used to protect the mobile suit from beam shots. It could completely cover the mobile suit with its size, with the exception of the head, providing full body protection. Despite its advantages, one of which is conserving power, the cloak has two disadvantages. First, unlike a beam shield, the cloak can only handle about 5 shots before the coating wears off, rendering the cloak to simple cloth. The second disadvantage is that the cloak offers no protection from physical weapons. However, due to the Ghost's ability to dispense obstructing Fog, which greatly reduces accuracy and the combat capabilities of many mobile weapons, such disadvantages can be greatly mitigated.

The Ghost uses the same Bio-Computer as its brother units. However, it may have been modified to compensate for the fact that Curtis Rothko is blind. Regardless, the Bio-Computer will only reach its full potential at the hands of a Newtype.

The Ghost apparently has the ability to release a thick fog to engulf the battlefield or to hide its location. This serves to obstruct the vision of other mobile suits and their pilots. However, the Ghost has only used the Fog Dispenser for its sudden appearances since most battles end before the Fog clears. Thus it's unknown at this time if the Ghost has the ability to actively release Fog during the heat of battle or not.

Like its brother units, the Ghost can temporarily "Open Face" to release Heat and increase performance. This allows the Ghost to perform otherwise extremely demanding maneuvers or attacks that would normally be considered impossible.

Curtis Rothko is able to activate the Ghost from a distance and was even able to have it release its Fog by voice command. How far advanced this technology is, the range it can be used, or if it can even perform other remote commands is currently unknown.

Converting all information it receive into sound, this system allows the blind Curtis Rothko to more effectively pilot the Ghost. This system has a range of 500 km(500,000 m) around the Ghost and delivers constant audio feedback making it very effective for someone blind. However, it has its flaws and can leave Curtis vulnerable when encountering new mobile weapons whose sounds and shape he and the computer database of the Ghost doesn't recognize, thus only regular generic alerts would be given off.

The Ghost first appeared during an attack by the Zanscare Empire forces, in stolen MW544B Sandhoges, who were attempting to silence Font Baud due to him discovering the existence of Angel Halo by accident. The pilot, Curtis Rothko, remotely commanded the Ghost to release a mist over the battlefield. During the confusion caused by the mist, Curtis entered the cockpit of the Ghost and though he is blind, he is able to make quick work of the Sandhoges due to his familiarity with the controls of the Ghost.

It is revealed after the battle by Curtis that the Ghost was discovered in deep space. The ship transporting it to the Crossbone Vanguard suffered an unknown accident, and for 20 years the Ghost lay dormant until Curtis, after a long search, discovered it in the ship wreckage. After this revelation, the Zanscare Empire attacked again and Curtis engaged them once more in the Ghost. Despite the Ghost being over 20 years old, it's still highly mobile, and due to Curtis' skills, the Ghost is easily able to keep up and take out the more modern mobile weapons.

However, a new unknown mobile weapon appeared to challenge the Ghost and proves to be a match for the Ghost and nearly lands a fatal blow. Due to it being an unknown machine, Curtis is unable to rely on the Specialized Sound and Headphones Sensor System to compensate for his blindness, thus putting the Ghost at a severe disadvantage. This enemy unit is then revealed to be the EMS-TC04 Desphys, though the Ghost is then forced onto the defensive when the remaining Zanscare Empire forces attack. Suddenly the Desphys attacks the Zanscare Empire forces for getting in its way. Once they're dealt with, the Desphys returns to attacking the Ghost.

With Font helping Curtis identify the Desphys, the Ghost turns the tables and kicks a building down, trapping the Desphys. The Ghost then attempts to escape during the chaos, but the Desphys breaks free and gives chase. Curtis, with the threat of the Ghost's Butterfly Buster, forces the hatch leading outside to be opened. The Ghost is then able to retreat onto their ship, the Manzana Flor, and escape. 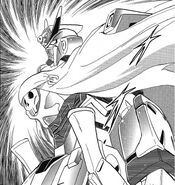 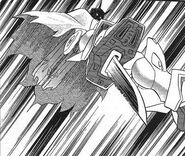 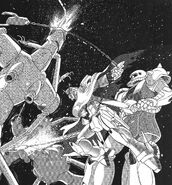 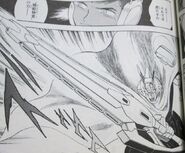