The XM-08 Zondo Gei is a mass-produced mobile suit of the Crossbone Vanguard. It was featured in the manga Mobile Suit Crossbone Gundam.

As with other mobile suits of the day, the Zondo Gei was designed to be light weight to make it fast and maneuverable. To this end, the Zondo Gei was made to be a mere 10 meters, making it one of the smallest mobile suits ever. However, its small size meant it had a smaller reactor, resulting in a decrease in efficiency and combat ability. Despite this shortcoming, the Zondo Gei could still use beam weapons and mounted a beam shield on the left shoulder.

To conserve energy, the pilots of the Zondo Gei preferred the signature Crossbone Vanguard mobile suit weapon, the shot lancer. Another equipment for conserving energy was an anti-beam cloak rigged on the mobile suit's waist, and it could withstand up to five beam shots before coming apart. However, the placement of the anti-beam cloak suggests it is mainly used to protect the mobile suit's lower half, while the upper half is protected from the admittedly limited coverage of the beam shield. The suit could mount a booster to its back to increase its speed and operational range.

Overall, the Zondo Gei was a sub-par machine when compared to contemporary mobile suits, possibly why it was never used by the original Crossbone Vanguard, and pilots had to rely more on their skills and intuitions to survive combat against superior machines.

A new protective device used by the mobile suits of the U.C. 0120 era. Thanks to their increased generator output, the scaled-down mobile suits of this era are able to use beam technology for defensive purposes. Unlike an I-field generator, which is effective only against beam attacks, the beam shield blocks both beam and projectile weapons. The beam shield generates a plane of energy similar to the blade of a beam saber. This plane is divided into multiple sections, which can be turned on or off as needed to conserve energy. Individual sections are also automatically deactivated whenever they're in danger of coming into contact with the mobile suit itself. The Zondo Gei is equipped with a beam shield mounted on its left shoulder.

A standard hand carried ranged beam weapon is the beam rifle. Capable of firing concentrated mega particles, attacks from a beam rifle can damage any armor not specially treated to resist it.

The beam saber is a small cylindrical device held in the mobile suit's hands when operated and is powered by a rechargeable energy capacitor. It is capable of cutting through any metal not treated with anti-beam coating.

A distinctive close combat weapon developed by the Crossbone Vanguard, the "shot lancer" is designed for combat in and around space colonies, where beam weapons would run the risk of triggering catastrophic reactor explosions in enemy mobile suits. Instead, the shot lancer uses electromagnetic acceleration to drive its tip through the enemy's armor, and the spearhead itself can also be launched like a missile.

The production of the Zondo Gei began around the year UC 0123, though the production run was limited and the Zondo Gei would not become known until some years later when the second Crossbone Vanguard would turn pirate and start a secret war with the Jupiter Empire. In the year UC 0133, the second Crossbone Vanguard possessed five Zondo Gei mobile suits, all operated by excellent pilots, that would serve as the backbone of their mobile suit forces. However by the same year, the Buch Concern had ceased producing parts for the ten-year old mobile suit and it was impossible to continue repairs. In the end, they had no choice but to sacrifice the units, sending them on autopilot against enemy units on the Jupiter's moon Io, to act as a distraction while the real mobile suit team attacked from a different direction. To make up for the loss of the Zondo Gei, the Crossbone Vanguard filled their ranks with captured EMS-06 Batara and an EMS-10 Pez Batara mobile suits. 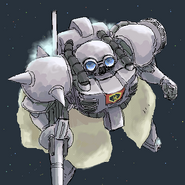 Retrieved from "https://gundam.fandom.com/wiki/XM-08_Zondo_Gei?oldid=400996"
Community content is available under CC-BY-SA unless otherwise noted.