The XM-07 Vigna Ghina is a mobile suit which appears in the anime movie Mobile Suit Gundam F91 and is piloted by Cecily Fairchild (Berah Ronah).

An advanced noble-use mobile suit developed by the Crossbone Vanguard, the Vigna Ghina was a prototype unit for commanders. Designed based on the XM-06 Dahgi Iris, it was assigned specifically to Berah Ronah and also functioned as a symbol for the organization. Its most unique feature is the four pairs of fin nozzles mounted on its back, which is developed from the shelf nozzles used by the Berga series. It also has increased propellant capacity thanks to the redesigned main thrusters. Due to these changes, the Vigna Ghina has outstanding mobility compared to other mobile suits at the time.

The Vigna Ghina has the same type of generator as the XM-04 Berga Dalas and XM-05 Berga Giros, and its overall performance is comparable to the F91 Gundam F91. Its armaments was simple, consisting of a beam rifle for ranged battle, two beam sabers for close combat and a beam shield for defence. Following Berah's defection to the Earth Federation Forces, the Crossbone Vanguard's emblem on the Vigna Ghina's head was painted over and its battle-damaged center chest armor was replaced, changing from a rounded one to a square one. The mobile suit was also given a beam launcher.

A new protective device used by the mobile suits of the U.C. 0120 era, it is mounted on the Vigna Ghina's left forearm. Thanks to their increased generator output, the scaled-down mobile suits of this era are able to use beam technology for defensive purposes. The beam shield generates a plane of energy similar to the blade of a beam saber and can block both beam and projectile weapons. Individual sections are also automatically deactivated whenever they're in danger of coming into contact with the mobile suit itself.

The beam saber is a small device held in the mobile suit's hands when operated and is powered by a rechargeable energy capacitor. It emits high-energy Minovsky particles to form a blade-shaped I-field (via manipulation of electromagnetic fields), and then fills this I-field shell with superheated Minovsky particle plasma to produce an effective cutting blade. A pair of beam sabers are stored on the Vigna Ghina's rear skirt armor.

An improved prototype version of the beam rifle used by the Dahgi Iris. The form of the sights, placement of the grip, and the overall structure have been changed.

The beam flag emitter is a technology that uses similar principals as a beam saber to generate a large beam shaped into a specific symbol. It is used to act as a battlefield standard, allowing squad units to quickly identify how they should form up in formation and often designating which units were commanders.

A development of shelf nozzle technology used by the XM-04 Berga Dalas and the XM-05 Berga Giros, the fin nozzles are eight independently articulated thrusters. They are directly connected to the mobile suit's generator, reducing energy transmission loss, and since the fulcrum point is located in the MS itself, the load is dispersed, improving the thrust-to-weight ratio. They also function as AMBAC limbs.

Only one Vigna Ghina was known to exist and it was given to Berah Ronah (aka Cecily Fairchild), who was the official ruler of Cosmo Babylonia but was just a figurehead for her grandfather. After training with the machine, Berah used the Vigna Ghina to join the mobile suit teams that invaded the Frontier I colony. Although she was the official ruler and was piloting a commander mobile suit, Berah was flying second to her mobile suit instructor Zabine Chareux. It was intended that her presence on the battlefield would not be as a combatant, but rather as a show of support for the troops and their actions, as well as a means for her to gain an understanding of war.

During her first sortie, Berah used the Vigna Ghina to battle against the F91 Gundam F91 until she realized the enemy pilot was her friend Seabook Arno. Seabook was able to convince Berah to leave the Crossbone Vanguard and join him, and she continued to use the Vigna Ghina to fight alongside Seabook. To symbolize her rejection of the Crossbone Vanguard, she painted over the emblem on the suit's forehead herself. The Vigna Ghina was heavily damaged in the final battle against Carozzo Ronah's XMA-01 Rafflesia mobile armor, and Cecily was thrown into space, but not before telepathically telling Seabook to use her suit. Seabook complied and destroyed the Vigna Ghina with the F91's beam launcher. The resulting explosion acted as a distraction, allowing Seabook to destroy the Rafflesia. 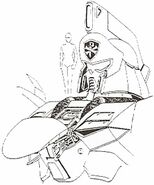 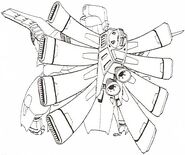 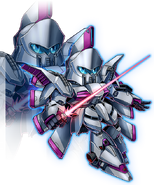 As featured in Lost Heroes 2