When Buch Aerodynamic got their hands on the data of Anaheim Electronics's newest Silhouette Formula Project, they quickly applied what they learnt to create a new MS, the Vigna Zirah. Based on the XM-06 Dahgi Iris, the Vigna Zirah was developed simultaneously with the XM-07 Vigna Ghina. While the Vigna Ghina has new technology in the form of fin nozzle thrusters, the Vigna Zirah is instead equipped with the new VSBRs (Variable Speed Beam Rifles) technology similar to those on the RXF-91 Silhouette Gundam. The pair of VSBRs not only improve the suit's firepower, but are also useful for AMBAC. Furthermore, thrusters are incorporated into the VSBRs, increasing the suit's thrust and mobility. The suit also has additional sensors to help aim its VSBRs and its head can be configured to resemble a Gundam-type head if necessary.

A standard melee weapon that generates a beam of plasma contained by an I-field. This small cylindrical device is held in the mobile suit's hands when operated, and is powered by a rechargeable energy capacitor. It is capable of cutting through any armor that has not been treated to resist it. When not in use, the beam sabers are stored in a rack located somewhere on the mobile suit's body.

Thanks to their increased generator output, the scaled-down MS of the U.C. 0120 era are able to use beam technology for defensive purposes. Unlike an I-field generator, which is effective only against beam attacks, the beam shield blocks both beam and projectile weapons. The beam shield generates a plane of energy similar to the blade of a beam saber. This plane is divided into multiple sections, which can be turned on or off as needed to conserve energy. Individual sections are also automatically deactivated whenever they're in danger of coming into contact with the mobile suit itself.

Unlike F91 Gundam F91's, Vigna Zirah's VSBR can't be removed from the mobile suit. However, these VSBRs have built-in thrusters and are designed to assist in AMBAC control. They also feature a pair of sensors each for superior accuracy.

The standard hand-carried weapon for the Vigna Zirah is a beam rifle. Capable of firing concentrated mega particles, shots fired from a beam rifle can damage any armor that has not been specially treated to resist it.

At least one Vigna Zirah was produced, and it was by the Crossbone Vanguard's Dark Tiger Squadron at Zebra Zone, and it was piloted by Shelf Sheffield. 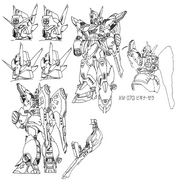 Retrieved from "https://gundam.fandom.com/wiki/XM-07G_Vigna_Zirah?oldid=450209"
Community content is available under CC-BY-SA unless otherwise noted.