The XM-05 Berga Giros is a mobile suit from the Mobile Suit Gundam F91 movie. It was piloted by Crossbone Vanguard's Zabine Chareux during the Cosmo Babylonia War in U.C. 0123.

Designed and produced in UC 0123, the XM-05 Berga Giros is an upgraded version of the XM-04 Berga Dalas. By specification the Berga Giros is 0.1 meters shorter and 0.2 metric tons lighter than the Berga Dalas. Also, the output of the ultracompact fusion reactor has been increased to 4790 kW, which is 540 kW greater than even the Federation's advanced F91 Gundam F91. The backpack, which is based on the model used on the Berga Dalas, has been redesigned with a greater number of shelf nozzles allowing for greater speed and maneuverability. Finally it has greater offensive power as two additional machine guns were added to the Berga Giros' Shot Lancer, giving it a total of four machine gun barrels.

A protective device that uses beam technology for defensive purposes. Unlike an I-field generator, which is effective only against beam attacks, the beam shield blocks both beam and projectile weapons. The beam shield generates a plane of energy similar to the blade of a beam saber. This plane is divided into multiple sections, which can be turned on or off as needed to conserve energy. Individual sections are also automatically deactivated whenever they're in danger of coming into contact with the mobile suit itself.

A distinctive close combat weapon developed by the Crossbone Vanguard, the Shot Lancer is designed for combat in and around space colonies, where beam weapons would run the risk of triggering catastrophic reactor explosions in enemy mobile suits. Instead, the Shot Lancer uses electromagnetic acceleration to drive its tip through the enemy's armor, and the spearhead itself can also be launched like a missile. The Shot Lancer was first equipped on XM-01 Den'an Zon and remained a standard melee weaponry for many Crossbone Vanguard mobile suit models. The Berga Giros' Shot Lancer can mount on the right arm, leaving the hand free to operate another weapon.

The Beam Flag Emitter is a technology that uses similar principals as a beam saber to generate a large beam shaped into a specific symbol. It is used to act as a battlefield standard, allowing squad units to quickly identify how they should form up in formation and often designating which units were commanders.

On the Berga Giros's back are set of shelf nozzles. These nozzles each function as a type of propellant tank - a disposable storage unit for extra fuel with built-in vernier thrusters, albeit much smaller those used previously on mobile suits and can adjust their angle. Because of their verniers and flexibility they are highly effective tools for increasing fuel capacity and increasing the mobile suit's overall agility. At the hands of ace pilots, the Shelf Nozzle can be launched towards the enemy as decoys, allowing them to get close for the kill.

When Zabine Chareux was assigned as Berah Ronah's mobile suit operations instructor he would often accompany her practice flights in his Berga Giros.

During the Crossbone Vanguard's attempt to invade Frontier I, Zabine Chareux's Berga Giros battled with his former protégé Annamarie Bourget and her XM-06 Dahgi Iris which led to severe damage of his unit, and he had to switch to the inferior XM-02 Den'an Gei for subsequent sorties. 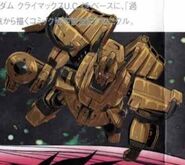 Berga Giros (Stein Bunyil Custom) as seen on Climax U.C.: The Bonds of the Bloodline manga 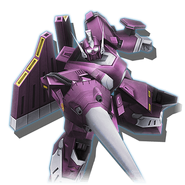 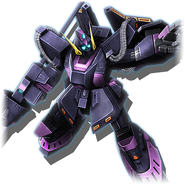 Retrieved from "https://gundam.fandom.com/wiki/XM-05_Berga_Giros?oldid=509226"
Community content is available under CC-BY-SA unless otherwise noted.