The XM-04 Berga Dalas is a mobile suit from the Mobile Suit Gundam F91 movie.

The XM-04 Berga Dalas was designed as a high performance suit to be used by commanders and other officers of the Crossbone Vanguard. As such the Berga Dalas was designed to possess greater speed, maneuverability, and power output than the XM-01 Den'an Zon being used by the grunt soldiers. One of its distinctive features and reason for greater mobility is the six shelf nozzles mounted on its backpack.

Like the Den'an Zon the Berga Dalas uses the same shot lancer and beam shield technologies as most other Crossbone Vanguard mobile suits use. However unlike the Den'an Zon the Berga Dalas is not equipped with a beam gun of any sort, and the only beam weapons it is known to be equipped with are a pair of beam sabers. But it does possess a beam flag emitter, allowing commanders to make a giant standard for their troops to follow into battle, even if it makes them a more visible target.

The data for the Berga Dalas would be used in the development of the XM-05 Berga Giros.

Unlike an I-field generator, which is effective only against beam attacks, the beam shield blocks both beam and projectile weapons. The beam shield generates a plane of energy similar to the blade of a beam saber. This plane is divided into multiple sections, which can be turned on or off as needed to conserve energy. Individual sections are also automatically deactivated whenever they're in danger of coming into contact with the mobile suit itself.

The beam saber is a small cylindrical device held in the mobile suit's hands when operated and is powered by a rechargeable energy capacitor. It emits a blade of plasma contained by an I-Field and is capable of cutting through any metal that has not been treated with anti-beam coating.

A distinctive close combat weapon developed by the Crossbone Vanguard, the Shot Lancer is designed for combat in and around space colonies, where beam weapons would run the risk of triggering catastrophic reactor explosions in enemy mobile suits. Instead, the shot lancer uses electromagnetic acceleration to drive its tip through the enemy's armor, and the spearhead itself can also be launched like a missile. The shot lancer was first equipped on XM-01 Den'an Zon and remained a standard melee weaponry for many Crossbone Vanguard mobile suit models. The Berga Dalas's shot lancer can mount on the right arm, leaving the hand free to operate another weapon.

To increase the shot lancer's combat effectiveness, the weapon mounts a pair of heavy machine guns.

On the Berga Dalas's back are set of shelf nozzles. This equipment functions as a type of propellant tanks - a disposable storage unit for extra fuel with built-in vernier thrusters, albeit much smaller those used previously on mobile suits and can adjust their angle. Because of their verniers and flexibility they are highly effective tools for increasing fuel capacity and increasing the mobile suit's overall agility.

The XM-04 Berga Dalas was originally designed and built in the year UC 117 to serve as the commander model mobile suit of the Crossbone Vanguard. However by the time of the invasion of the Frontier IV colony a new commander model mobile suit had been developed to replace it, the XM-05 Berga Giros. Despite this several commanders such as Dorel Ronah preferred the older Berga Dalas. 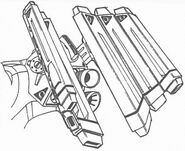 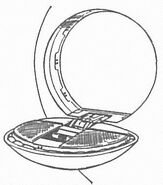 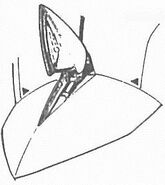 XM-04 Berga Dalas Lineart
Add a photo to this gallery

Retrieved from "https://gundam.fandom.com/wiki/XM-04_Berga_Dalas?oldid=459638"
Community content is available under CC-BY-SA unless otherwise noted.