The XM-03 Ebirhu-S is a mobile suit from the Mobile Suit Gundam F91 movie.

The Ebirhu-S is the smallest and lightest mobile suit used by the Crossbone Vanguard. It also possesses the second slowest acceleration speed and its power generator has the lowest power output. Though it is a reconnaissance mobile suit the Ebirhu-S possesses an astounding amount of weapons, though only two of those weapons are beam weapons, a single beam spray gun and a single beam saber. Its other weapons are a shot lancer with two charges, a four barrel heavy machine gun and four shot claws mounted in the left hand, and a rack of three rocket propelled grenades mounted above the left shoulder. The reconnaissance pod also mounts a light automated weapon of some kind, but its caliber is too small to damage a mobile suit.

For defense the Ebirhu-S relies on a physical shield and is one of two mobile suits in the Crossbone Vanguard that is not equipped with an advanced beam shield because it interferes with the mobile suit's sensors.

A distinctive close combat weapon developed by the Crossbone Vanguard, the shot lancer is designed for combat in and around space colonies, where beam weapons would run the risk of triggering catastrophic reactor explosions in enemy mobile suits. Instead, the shot lancer uses electromagnetic acceleration to drive its tip through the enemy's armor, and the spearhead itself can also be launched like a missile. Most shot lancers are equipped with heavy machine guns but the Ebirhu-S's is not.

The Ebirhu-S mounts a shot claw weapon in place of a standard manipulator hand on its left arm. A variation of shot lancer technology, the shot claw uses electromagnetism to accelerate either the entire device or just one of the four claws. The weapon has enough power to accelerate a single claw with the force needed to completely penetrate and go through the bridge of a Salamis Kai-class cruiser.

The Ebirhu-S is equipped with three rocket-propelled grenades mounted on top of the left shoulder. These grenades are anti-mobile suit explosives and as such are each individually strong enough to destroy a mobile suit.

The beam saber is a standard close range combat weapon that uses a shaped I-field to contain plasma that is hot enough to cut through just about any armor. A beam saber can only be effectively blocked with another beam saber, a beam shield, and can be used to block the beam from a beam rifle.

The shield is a plate of armor typically attached to a mobile suit's arm though it can be placed anywhere with the appropriate mounts. Often shields are thicker than the mobile suit's standard armor and can take multiple hits from mobile suit machine guns. Also the shield is treated with an anti-beam coating that allows the shield to block several attacks from beam weapons, though the ability is limited to a few hits before it is rendered useless. Depending on the power output of the beam the shield could be destroyed in a single shot. Physical shields are less sophisticated and less effective than the beam shield technology employed by the majority of the Crossbone Vangaurd mobile suits, however the operation of a beam shield would interfere with the Ebirhu-S's sensitive sensors and would alert any enemy forces of the mobile suit's presence.

The XM-03 Ebirhu-S is the Crossbone Vanguard's first model reconnaissance mobile suit designed and deployed in the year UC 123. It was deployed alongside other Crossbone Vanguard mobile suits during the invasion of the Frontier colonies. Several Ebirhu-S would typically work in teams led by a XM-06 Dahgi Iris, a commander model reconnaissance mobile suit. Ebirhu-S would be sent to scout ahead in enemy territory and were used as sentries to monitor Earth Federation Fleet movements. 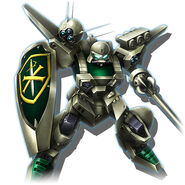