The XM-02 Den'an Gei is a mobile suit from the Mobile Suit Gundam F91 movie.

The XM-02 Den'an Gei is a mobile suit designed for guerrilla warfare. The Den'an Gei did not carry the Vanguard's trademark shot lancer weapon, instead being armed with vulcan guns, an arm beam gun, a grenade rack, a beam saber, and a beam rifle for more well-rounded firepower. This array of heavier firepower made the Den'an Gei more well-suited to hit-and-run strikes used in guerrilla-type missions.

Vulcan guns are small caliber weapons typically used as a mid-range defense against small, lightly armored targets such as missiles, or as a close-range defense against more heavily armored machine such as mobile suits. The Den'an Gei is the only Crossbone Vanguard mobile suit equipped with vulcan guns. Since the Den'an Gei is the mobile suit best suited for guerrilla-type missions, such as search and destroy missions in asteroid mines, it was expected to enter close quarters where other ranged weapons would not be as effective.

The Den'an Gei is equipped with a 3-slot rocket propelled grenade rack.

A beam gun is mounted on the Den'an Gei's left arm, below the beam shield. The beam gun is a "light" ranged beam weapon that can be quickly used by the Den'an Gei in the event that its hand-held weapons are unavailable.

Unlike an I-field generator, which is effective only against beam attacks, the beam shield blocks both beam and projectile weapons. The beam shield generates a plane of energy similar to the blade of a beam saber. This plane is divided into multiple sections, which can be turned on or off as needed to conserve energy. Individual sections are also automatically deactivated whenever they're in danger of coming into contact with the mobile suit itself.

A standard hand carried ranged beam weapon is the beam rifle. Capable of firing mega particle, attacks from a beam rifle are can damage any ordinary armor that has not be specially treated to resist it. The Den'an Gei's beam rifle is powered by a rechargeable energy cap.

A tire-shaped support machine that possesses high mobility. For offensive purposes the Einerad is armed with a pair of beam cannons and a missile pod. Appears on a customized Den'an Gei Gunpla in episode 1 of Gundam Build Fighters.

Designed in the year UC 123 the Den'an Gei participated in the Crossbone Vanguard's invasion of the Frontier colonies. Though it was decidedly superior to Federation mobile suits in standard combat the Den'an Gei proved especially effective when the Crossbone Vanguard was clearing out Federation mobile suits from the maze-like interior of the resource asteroid of Frontier 1.

After the destruction of his XM-05 Berga Giros, Crossbone Vanguard ace pilot Zabine Chareux chose to pilot a Den'an Gei. 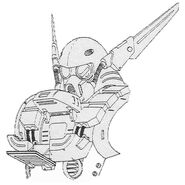 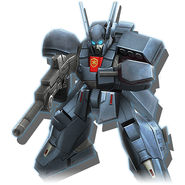 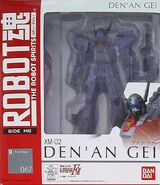 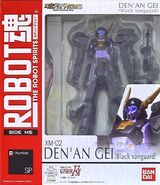 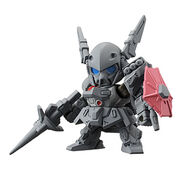 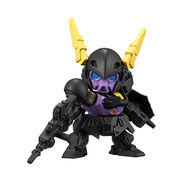