Though the RGM-109 Heavygun was the first miniature mobile suit to be mass-produced, it is the Den'an Zon which is truly the first representative of a new age of mobile suits in the late Universal Century. The Den'an Zon, developed and produced by the Crossbone Vanguard, is lighter and had greater performance than any Federation mobile suits produced in UC 117, the year the Den'an Zon was first produced, or in the year UC 123 when the war between the Federation and the Crossbone Vanguard began. Whereas the Heavygun was simply a smaller version of the RGM-89 Jegan and has nothing new, the Den'an Zon has new features such as the defensive beam shield and the offensive shot lancer.

Invasion of the Frontier Colonies seems to be taken into consideration when the Den'an Zon was developed as its primary weapon is the shot lancer, which has a combination of close and long-range weapons in the form of machine guns and a pile-driver lance respectively. Although not an advanced weapon, the shot lancer produces far less collateral damage than beam weapons, thus keeping damage inside the colonies to a minimum.

Unlike the shot lancer, the beam shield is truly new technology. While physical shield can be rendered useless by consecutive hits, a beam shield could be maintained as a virtually impenetrable barrier as long as the mobile suit has power. Combined with the Den'an Zon's greater maneuverability, the suit's pilot had a higher survival chance on the battlefield. Despite being an incredible defensive technology, it was not perfect. A well-placed attack could destroy the beam shield emitter, and a beam attack with a high energy concentration, such as an attack from the F91 Gundam F91's VSBRs, could overpower the beam shield.

Mounted on the left forearm, below the beam shield, the dual-beam gun is the only fixed ranged beam weapon used by the Den'an Zon.

Unlike an I-field generator, which is effective only against beam attacks, the beam shield blocks both beam and projectile weapons. The beam shield generates a plane of energy similar to the blade of a beam saber. This plane is divided into multiple sections, which can be turned on or off as needed to conserve energy, or whenever they're in danger of coming into contact with the mobile suit itself.

A distinctive close combat weapon developed by the Crossbone Vanguard, the Shot Lancer is designed for combat in and around space colonies, where beam weapons would run the risk of triggering catastrophic reactor explosions in enemy mobile suits. Instead, the shot lancer uses electromagnetic acceleration to drive its tip through the enemy's armor, and the spearhead itself can also be launched like a missile. The shot lancer was first equipped on the Den'an Zon and remained a standard melee weaponry for many Crossbone Vanguard mobile suits.

To increase the shot lancer's combat effectiveness, the weapon mounts a pair of heavy machine guns.

The Den'an Zon can be equipped with a pair of optical visors that are fitted over its standard "goggle"-type optics. So far, these have only been seen on units in the Crossbone Vanguard's Dark Tiger Squadron.

A tire-shaped support machine that possesses high mobility. For offensive purposes, the Einerad is armed with a pair of beam cannons and a missile pod. Appears on a customized Den'an Zon Gunpla in episode 1 of Gundam Build Fighters.

The Den'an Zon was first sighted by those outside the Crossbone Vanguard on February 18, 0123 U.C. when several Anaheim Electronics test pilots saw a Den'an Zon from the Dark Tiger Squadron lurking around a meteor in Side 3's Zebra Zone. The test pilot, Kevin Forrest, who was piloting an RGM-111 Hardygun at the time, mistook the Den'an Zon for a type of Zaku mobile suit because of the sensor visor it was equipped with. The Den'an Zon was driven off by Tokio Randall and his RXF-91 Silhouette Gundam. The pilot of the Den'an Zon, Morris O'Barry, returned to his mothership and reported the incident. His commander decided that it was the Dark Tiger Squadron's duty to destroy those that saw the Den'an Zon before they could go back and report it to their superiors. The attack force included at least one Den'an Zon piloted by O'Barry.

Later, on the 22 of February of the same year, O'Barry's Den'an Zon was an escort to Shelf Sheffield and his XM-05B Berga Balus for an information exchange with Federation officer and RX-99 Neo Gundam Unit 1 pilot Baz Galemson. However, Galemson doublecrossed the Dark Tiger Squadron and tried to kill them, only succeeding to kill O'Barry who was outside his Den'an Zon.

After the financial bankruptcy of the Crossbone Vanguard, the XM-01 Den'an Zon remained in active service as part of colony defense forces. Likely the colonies that used the Den'an Zon were those that still housed wealthy individuals who would have been the aristocracy of Cosmo Babylonia, such as Sheridan Ronah, had the government not gone bankrupt. 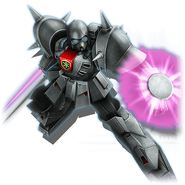 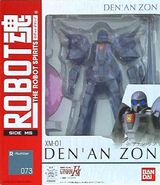 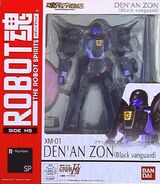 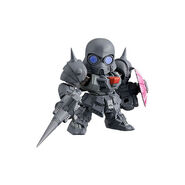 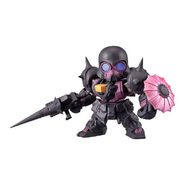