The Workloader is a common commercial-use construction machine that appears in the anime Mobile Suit Gundam 00.

A heavy machine designed with industrial-use in mind, and is mainly used for construction. It is based on a humanoid work machine that was used for work and defense in the Orbital Elevator construction project proposed by Aeolia Schenberg in 2090 AD. It consists of a sight-seeing cockpit block as the main frame, two arms, and a tripod-type roller unit. It is widespread in many parts of the world, and there are also combat models armed with machine guns and missile pods.

The Workloader was used in the battle in Republic of Krugis in which it battles Azadistan's Anfs (Episode 1) where countless numbers of them were destroyed and outnumbered by superior MS forces. The Workloader (with Mining Equipment) was also seen to battle with Lockon Stratos(Neil Dylandy)/Gundam Dynames) who took out scores of them before scaring them off in South Africa (Episode 3). 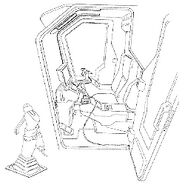