Woody Malden (ウッディ・マルデン, Woody Malden?) is a character that appears in the anime Mobile Suit Gundam.

Woody was a member of the Earth Federation Forces stationed at Jaburo. He was engaged to Matilda Ajan and was going to marry her after the Odessa mission. Sadly, Matilda was killed during an attack by the Black Tri-Stars when Ortega's MS-09 Dom crushed her Medea transport. When the White Base arrives in Jaburo, he takes on the responsibility of repairing the ship that Matilda risked her life to protect. At the same time, he was also preparing for the departure of the SCVA-72 Thoroughbred, the same type of ship as the White Base.

Later in Jaburo, Woody assures Amuro Ray that it wasn't his fault Matilda died and that he should stop feeling so bad about what happened. Meanwhile, the Mad Angler squadron led by Char Aznable and reinforcements from Zeon's North American base at California launch an all-out assault on Jaburo. When Woody learns of the invasion of Zeon forces, he sets out in a Fanfan to protect the White Base, which has been repaired and air-tightened. Ignoring Amuro's call for him to stay back, he intervenes between the battle between Char's Z'Gok and Amuro's Gundam. He destroys the Z'Gok's mono-eye with a missile, but is killed immediately afterwards when his cockpit is crushed by the Z'Gok's arm.

In "Mobile Suit Gundam: The Origin", Woody's role is largely the same, but during the Battle of Jaburo, Amuro is nearly killed by Char's Z'Gok as he uses a GM while the Gundam is not available. Woody saves Amuro by attacking Char, and loses his life to the Zeon ace to allow Amuro to escape.

Woody also appears in the novelization in the same capacity. He's shown to be a bit jealous over a seeming attraction between Matilda and Amuro. Unlike the anime, Woody is presumed to have survived the One Year War.

Woody is one of the characters appearing in the OVA. He was seen along with Matilda, and he often speaks a line "I'm Woody".

Woody appears in the manga as "Woody-san". 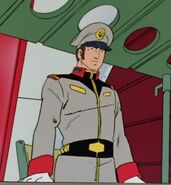