William Sutherland was an officer of the Earth Alliance's general staff of the Alliance's JOSH-A base. He is also a radical member of Blue Cosmos and a subordinate of its leader, Muruta Azrael. He didn't like the fact that the Strike was being piloted by a Coordinator pilot. Therefore, he thought it would be better if the Strike and its mother ship, the Archangel, did not reach the Alaska base, and he did not send any reinforcements or supplies after the Archangel's descent to Earth, leaving it in a state of isolation and helplessness. (The generals and officers in command seemed to be of the same opinion, and were baffled by the fact that the Archangel had reached Alaska, and were also annoyed by the fact that the pilot was a Coordinator.)

Once the Archangel finally makes it to JOSH-A, in a meeting with other top Alliance officers, he comments on how Kira Yamato was the one who protected the Archangel prior to his MIA status, in which another officer says it was a "fortunate loss". After Blue Cosmos finds out about ZAFT's planned attack on the base (the information having been provided by Rau Le Creuset), Azrael has Sutherland and the general staff set a trap that would turn the tide of the war in their favor and tip the balance of the Alliance's power towards the Blue Cosmos-controlled Atlantic Federation. During the Battle of JOSH-A, Sutherland and the entire Atlantic Federation staff quietly evacuate JOSH-A by submarine, leaving behind the Archangel and the Eurasian Federation forces to keep ZAFT occupied until they were safely away. Once ZAFT breached the base and got deep enough inside, Sutherland and the general staff activated the CYCLOPS system, wiping out 80% of the ZAFT forces, along with their Eurasian allies. He participated in the third operation to retake Victoria, and mentioned to Azrael about the good performance of the mass-produced MS Strike Dagger, and they went into space together. After that, he commanded the nuclear attack unit Peacemaker Squadron, which successfully carried out a nuclear attack on Boaz. According to the manga version of "Mobile Suit Gundam SEED Re:", this is the second nuclear attack by Sutherland's command team, following the nuclear attack on the Junius Seven at the time of Bloody Valentine.

In the Second Battle of Jachin Due, Sutherland commands a Agamemnon-class ship, the Doolittle, which is equipped with TS-MA2 Moebius mobile armors armed with nuclear missiles. He later dies when his ship is destroyed when the Duel, piloted by Yzak Jule, fires a grenade launcher from his rifle, blowing up the bridge. 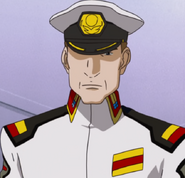