With Zeon losing their foothold on Earth, the 603rd Technical Evaluation Unit is given a new project — to infiltrate the Earth Federation's airspace and attack its warships launching from Jaburo with a prototype mobile weapon. 2nd Lt. Werner Holbein, an arrogant Zeon Marine who boasts a proud maritime family tradition, is assigned to the Jotunheim to pilot the mobile diver unit MSM-07Di Ze'Gok.

On their first test drop mission, Holbein pilots the Ze'Gok and approaches Jaburo's airspace as the Salamis-class launches from the underground base. Werner ignores a computer warning to fire the missiles and recites a saying of his grandfather that it's best to get close to your prey before they notice you. Holbein then fires the four missiles, but they all miss the Salamis. He ejects the container pod and is picked up by a Gaw Atmospheric Attack Carrier. Later on, the Ze'Gok is prepared for a night attack, this time Holbein is accompanied and monitored by Hideto Washiya as co-pilot. As the Ze'Gok launches, Martin Prochnow orders a retreat when a Federation ship enters the area. The Ze'Gok appears over Jaburo as several Salamises launch. Just as Washiya is about to fire the rockets, Holbein suddenly makes a hard turn to avoid a volley of missiles from Jaburo. Holbein then fires the rockets, but their altitude is too low now and the rockets fall short of the targets.

On the third and last test drop mission, several Federation warships prepare to launch from Jaburo. The Ze'Gok's mobile diver has been equipped with the Kuhblume scattering beam cannon. The mission this time is to drop the Ze'Gok straight down and turn to attack the Federation ships as they ascend. When the Ze'Gok is dropped, four Salamis cruisers and a Magellan-class battleship are launched from Jaburo. Holbein fires the Kuhblume scattering beam cannon hitting all five ships and destroy them. After he deposes the Kuhblume and flies toward the Gaw, He senses something, and the Gaw is suddenly destroyed by missiles from Core Booster II Interceptor Type. The Federation aircrafts then chase and fires at the Ze'Gok, which penetrates the cockpit and mortally injures Holbein. The Ze'Gok then turns and crashes into the ocean. 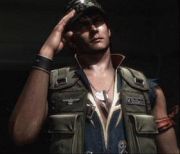 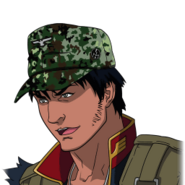 Retrieved from "https://gundam.fandom.com/wiki/Werner_Holbein?oldid=483506"
Community content is available under CC-BY-SA unless otherwise noted.