Wedoba Morte(ヴェドバ・モルテ) is a fictional character from the After War Gundam X anime.

Buying information from an Information Broker, Wedoba sets out after the GX-9900 Gundam X to capture it for herself. Finding Garrod Ran sitting by a campfire with Tiffa Adill she launches an attack on them, missing as Tiffa pushes Garrod out of the line of fire. Lining up a second shot, her hand held machine cannon is destroyed by another Vulture after the Gundam X. Pulling out her Heat Saber, she attacks Garrod as he fights back in the Gundam, the young pilot blocking with the Gundam's arm. Drawing a beam saber, Garrod cuts off the right leg of Wedoba's mobile suit below the knee, causing it to fall over. As she curses her luck, a Vulture pilot in a RMS-006 Jenice crushes her cockpit with the butt of his machine gun, killing her. 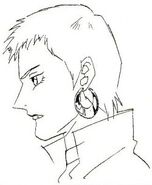 Retrieved from "https://gundam.fandom.com/wiki/Wedoba_Morte?oldid=349844"
Community content is available under CC-BY-SA unless otherwise noted.