The Walter Gundam is a mobile fighters that appears in Mobile Fighter G Gundam.

This unusual mobile fighter serves as the commander of the Death Army's naval forces. Its streamlined, spherical Attack Mode gives the Walter Gundam superb underwater mobility, as well as the ability to fly, and it can seal itself up into a seamless ball for maximum protection. On land, it changes into a Standing Mode supported by three slender legs. The Walter Gundam's main weapons are a pair of tentacle arms whose claws house powerful beam cannons, but at close range it can also open its face plate to reveal fangs to deliver a lethal bite.

The Gundam's mouth opens and bites the opponent.

A beam cannon built into each of the claws.

The Gundam has eight beam cannons mounted on its torso.

As the 13th Gundam Fight continued, the JDG-00X Devil Gundam created Four Heavenly Kings for its protection: GF13-001NHII Master Gundam, Grand Gundam, Gundam Heaven's Sword and Walter Gundam. The Walter Gundam (on autopilot) first appeared when three of the Heavenly Kings attempted to stop Domon Kasshu from reaching the Gundam Fight Finals on time. For its pilot, Neo Hong Kong's Wong Yunfat selected Allenby Beardsley, the powerful young champion of Neo Sweden. To make his 'Devil Allenby' unstoppable, Wong infected her with DG cells and mounted his own version of the GF13-050NSW Nobel Gundam's Berserker System on the Walter Gundam. The Walter Gundam was able to fight in several modes: a high speed ball, a mobile armor-like ball with two arm beam cannons and finally as a three-legged mobile fighter. Allenby's agility allowed for incredibly fast movement in mobile armor mode. Under the double control of the Berserker System and the DG cells, Allenby was unable to control her actions.

With Domon Kasshu busy fighting in the Battle Royale, the task of fighting Allenby fell to Rain Mikamura and the JMF1336R Rising Gundam. Though Rain destroyed the Berserker System, she was forced to destroy the main body of the Walter Gundam to defeat it and rescue Allenby. After Ulube Ishikawa used Rain to resurrect the Devil Gundam, the Walter Gundam was reactivated and piloted by Wong, having survived and infected with DG Cells. While trying to reach space and claim the Devil Gundam, Wong and the Walter Gundam were easily destroyed by Domon Kasshu's GF13-017NJII God Gundam. 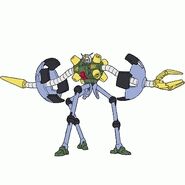 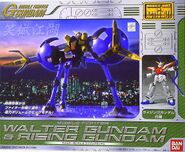