He is a symbol of the bureaucratic nature of the early Federation military, sealing off the White Base that had been evacuated from Side 7 and detaining the crew for using military secrets without permission. At the time of Char's surprise attack, he tried to launch himself in the flagship Magellan, but was caught in a trap and had to block the gate with his ship. The crew of the White Base tries to intercept the Magellan, but Paolo Cassius persuades them to go out and eliminates the Magellan with the White Base's main gun. After defeating Char, he decides to leave the operation of the White Base to Bright and others, and they depart for Earth.

He is later promoted to Colonel and becomes the commander of the 3rd Fleet, and participates in the Battle of Solomon. In episode 35, he expresses his joy at Bright's growth, whom he has not seen in a long time, and in episode 38, he recalls that White Base's success in destroying the Delamin fleet has made him stronger. After the fall of the Solomon, he heads to the Texas Colony airspace in the Magellan-class Renown to clean up the remaining enemies and to support the White Base. On the way, he spotted Barom's Chivvay-class heavy cruiser, which was in a hurry to join up with the Delamin fleet, and succeeded in attacking it first, sinking it after an engagement. However, in the battle to prevent Char Aznable's Zanzibar-class from leaving the Texas Colony, he is killed in action when his ship is sunk. In the movie version, the timing of the Battle of Solomon and the Texas version were switched, so he was killed in the Battle of Solomon.

The Origin version of Wakkein parallels that of the TV series when the White Base flees to Luna II. There are extra scenes where he talks to Captain Paolo Cassius, who was his instructor at Officer Training School. Mortally wounded, Captain Paolo reminds Wakkein to remember what he had put in his final evaluation, which was "Regarding both theory and practice, nothing left to be desired but for an occasional lack of flexibility." Before passing away, Captain Paolo tells Wakkein that a new generation of youth is fighting the war, and perhaps it's best to let them take the spotlight. Upon this, Wakkein lets the White Base proceed to Earth.

Wakkein appears once again at the Battle of A Baoa Qu, having survived the Solar Ray attack that destroyed a third of the Federation Fleet. After consulting with Jaburo, he rallies the remaining Fleet and sets them up in a position to stage the final attack. During the opening phases of the battle, his line of Magellan-class battleships come under fire from the supercarrier Dolos, under the command of Kycilia Zabi. With most of his battleships destroyed and his own ship taking heavy damage, Wakkein contacts Bright Noa and gives one last set of orders, ordering the White Base and the other Pegasus-class sister ships to commence an all-out, point blank assault on A Baoa Qu. The Dolos then finishes off Wakkein's vessel, killing him and all crew aboard. 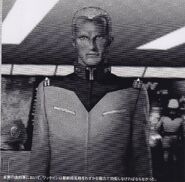