The WMS-GEX1 G-Exes is a custom mobile suit featured in the first generation of the anime series Mobile Suit Gundam AGE and is piloted by Woolf Enneacle.

The G-Exes is a custom mobile suit which Woolf Enneacle commissioned from the Madorna Workshop to replace his RGE-B790CW Genoace Custom.[1] It is developed from the CMS-B/67 Shaldoll's frame and also take references from AGE-1 Gundam AGE-1 Normal's data, which Woolf had provided without permission from the Diva.[2]

Alongside the AGE-1 Gundam AGE-1 Normal, the G-Exes is the second mobile suit to destroy a Vagan MS and its armor can withstand a Gafran's beam vulcan attack with no apparent damage. While inspecting the suit's blueprint, Flit Asuno noted that the G-Exes' joints mechanism and flexibility are inferior to Gundam AGE-1's.[3]The G-Exes' design focuses on mobility and agility, and for this reason, it is fitted with improved boosters. Its weaponry include Beam Rifle, two Beam Sabers, two Missile Pods and a shield.

Mounted in its head, the two beam vulcan guns are used to intercept incoming missiles and enemy units at close range.

Stored in the backpack, the two beam sabers have high output and can destroy Gafrans and Baqtos in one strike. One can be used as a reserve weapon, or both can be used simultaneously in a twin sword fashion. Woolf nicknamed the attack using both sabers as "Wolf Fangs".

The basic long ranged armament of the G-Exes. The beam rifle was developed using Gundam AGE-1's data and hence has comparable firepower to the AGE-1's DODS Rifle. Like the DODS Rifle, it also produces a spiral spinning effect of the beam as it fires and can do significant damage to Vagan's MS. The rifle can be stored on the rear skirt armor.

A missile pod containing two missiles are mounted in each side skirt armor. The missiles have enough firepower to destroy an enemy unit in one shot.

The G-Exes's defensive armament. A elongated shield that covers most of the G-Exes. 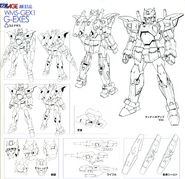 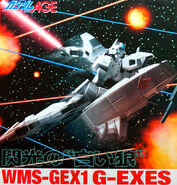 Retrieved from "https://gundam.fandom.com/wiki/WMS-GEX1_G-Exes?oldid=462785"
Community content is available under CC-BY-SA unless otherwise noted.