As the Maganac Corps of the Middle East region waged a war of resistance against the encroaching military control of OZ and the United Earth Sphere Alliance, many Maganac Corps members and squad leaders customized their Maganac mobile suits. One such customized model was operated by Rasid Kurama, leader of the Maganac Corps. In addition to a "commander's antenna" on the head and stylized shoulder armor similar to that on the XXXG-01SR Gundam Sandrock, Rasid's Maganac also mounted a pair of head-mounted vulcan guns for close-range combat. The EW version has a pair of sub-sensors on its chest.

Defensive equipment large enough to cover the entire body, it is equipped on the left arm via an attachment. Reactive armor can also be applied to its surface. 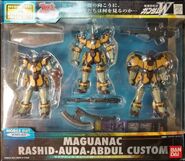 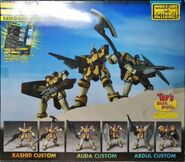