The WMS-03 Maganac is a mobile suit featured in Mobile Suit Gundam Wing.

The WMS-03 Maganac was a mobile suit developed by the countries of the Middle East to counter OZ and the United Earth Sphere Alliance.[1] Intended for operations in the desert, an unusual environment for mobile suits, the Maganac was given high dust-proof capabilities and mobility.[1] Despite being mobile suits with specifications close to local types, they have high versatility and their performance surpassed the OZ-06MS Leo.[1] The Maganac was also developed to be operated in cooperation with the XXXG-01SR Gundam Sandrock.[1] Almost all of the 40 units were individually customized to have different abilities and traits such as enhanced melee combat capabilities and communication functions depending on their pilots' skills and roles, there is also the commander type piloted by Rasid Kurama, the leader of the Corps.[1] They can also be adapted for operations in space.[1]

Defensive equipment large enough to cover the entire body, it is equipped on the left arm via an attachment.[1] Reactive armor can also be applied to its surface.[1] Can be stored on the backpack when not in use.[1]

A melee weapon for severing enemies, it has a large blade that emits high heat.[1] It can be thrown and is equipped by many of the Maganac Corps units.[1]

The Maganac Large Rifle Type mounts a beam saber on its backpack.

Equipped instead of the left hand in the Maganac Rifle Type.

Despite the OZ and United Earth Sphere Alliance's powerful influence and military strength, some pockets of people in the Earth Sphere continued to resist them. One of these groups was the Maganac Corps, a band of freedom fighters operating primarily out of the Middle East who had built their own mobile suit, the WMS-03 Maganac. During the Operation Meteor in A.C.195, 40 Maganac units fought alongside the Gundam Sandrock on Earth and in Space, and all of them survived.[1] This proved the skills of the pilots and the performance of the Maganacs.[1]

A Maganac fitted with a shell-firing arm rifle instead of a left hand.

A Maganac equipped with a large rifle. It also stores a single beam saber on the backpack.

Introduced in New Mobile Report Gundam Wing: Frozen Teardrop. When Katherine Oud Winner defects from the group, she is intercepted by Trowa, along with Heero and Duo in their Snow White and Warlock, and she attacks them with Maganac mobile dolls as she tries to escape. These 39 Maganac mobile dolls are controlled by a piloted commander type machine with an added antenna on the head and added spikes on the shoulder armor. 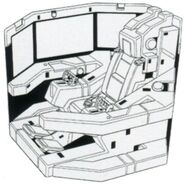 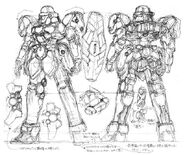 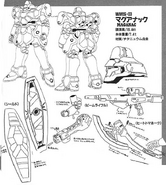