The WF-02MD (OZ-03MD) Virgo II (aka Virgo II) is a mass-produced A.I. controlled space mobile suit and successor to the OZ-02MD Virgo. It is introduced in Mobile Suit Gundam Wing.

Physically, there is not much difference between the Virgo and Virgo II, however the changes that were made significantly improved their combat capabilities. The first major design change was the addition of shoulder-mounted thruster pods that dramatically improved its speed and mobility in space.

The second modification is to its armaments. The Virgo II has eight planet defensors instead of its predecessor's four, essentially doubling its defensive capabilities. The suit's close combat capabilities were also improved with the addition of two beam sabers stored below the shoulder joint. In terms of its mid-long range weaponry, the original Virgo's beam cannon was replaced by a mega beam cannon, which is an optional armament instead of fixed, and could be swapped with a beam rifle.

A new optional weapon for the Virgo II is a beam rifle that can be used in place of the mega beam cannon. Although the beam rifle had a lower power rating, its rate of fire is faster. The beam rifle can be stored within the storage racks of the shoulder thruster pods.[1] White Fang typically preferred to outfit the Virgo II with this weapon for standard combat missions. When required, the Virgo II can use another beam rifle for increased firepower.

Like its predecessor, the Virgo II can be equipped with a destructive beam cannon, in this case the mega beam cannon. Unlike the Virgo's beam cannon, the mega beam cannon is an optional armament instead of fixed, and can be swapped out with other weapons when needed. When equipped, this weapon is linked to the shoulder mounted thruster pod via a cable, allowing it to draw energy from the MS.

Unlike the Virgo, the Virgo II is outfitted with a pair of beam sabers, allowing it to perform melee attacks. The beam sabers are stored on the underside of the shoulder armor, below the shoulder joint.

Like its predecessor, the Virgo II is equipped with planet defensors, small disc-shaped objects which are capable of generating a defensive electromagnetic barrier capable of blocking most incoming attacks. The Virgo II has eight planet defensors, four stored on each shoulder. When low on energy, they can return to the rack on the mobile unit's shoulders for recharging.

Like its predecessor, the Virgo II was controlled by the mobile doll system, negating the need for a human pilot to function. Because it is a computer controlling the Virgo II, its movements lack innovation, relying on pre-programmed data to determine how it reacts in a given situation. However they were later upgraded to be incorporated into a network that connected each Virgo II to a control room within Libra where a human influenced by an Epyon style ZERO System (aka Epyon System) would relay battle orders to the mobile dolls, increasing their combat effectiveness.[2]

The OZ engineer Tubarov developed this mobile suit as a successor to his previous creation, the Virgo. Tubarov died during the battle in which White Fang took control of OZ's mobile doll lunar factory. White Fang then found his plans, and with the parts on hand, began building the new version of the Virgo. Once completed, they gave the mobile doll the model number WF-02MD Virgo II, and it was painted in an olive drab color scheme to differentiate it from OZ's Virgo. With the Virgo II, the White Fang began a campaign against OZ and the Romefeller Foundation for the sake of space independence.

Once OZ's and Romefeller's presence in space was almost non-existent, White Fang's army of Virgo IIs were sent against the Gundams in numerous battle. Despite having a numerical superiority in each battle, the abilities of the five Gundams and the skills of the Gundam pilots were too great, dealing heavy losses to White Fang's forces. During the White Fang's final operation, where they attempted to drop the Libra onto Earth, the Virgo II army was tasked with defending the battleship against the combined forces of the Gundams, an army of Leo Space Types led by Treize Khushrenada in the OZ-00MS2 Tallgeese II, and the Maganac Corps.[3] 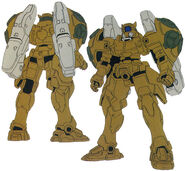 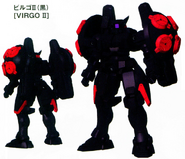 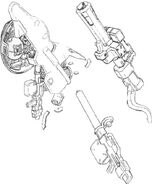 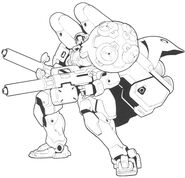 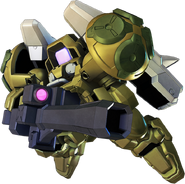