The Volga-class is an enhanced variant of the Baikal-class. It is a ESF battlecruiser used by the ESF-Army in A wakening of the Trailblazer.

The Volga-class is the successor of the Baikal-class. Combat experience against Celestial Being (CB) made the ESF realize that their ships, even in superior numbers, was just no match for a single CB battlecruiser. To create a combative edge against CB and future threats, a new class of ship was needed, but with a vow of pacifism in future endeavors, a massive ship re-fit was decided instead.

Building on top of the pre-existing Baikal-class, ESF engineers added an entirely new module section to the aft of the ship with new system enhancements. A pair of MS hangers was added to expand the port and starboard of the ship and increased its MS support capacity. Attached to the new MS hangers are a pair of GN Engines on each side (suggestively each installed with 4 GN T Drives). A series of support beams were added to the aft to support the overall weight and structure of the new module. Its held together by a bridge platform that connects the two hangers together. The new additions were designed to limit obstructing the original capabilities of the Baikal-class; most if-not-all the original capabilities of its former class remains.

Just like the original class, the bow of the ship is a MS hanger. When deploying a MS squadron, the hatch would slide forward to sortie the squad. The hatch door also doubles as a MS catapult should the squad need to sortie with advanced speed. The new additional MS hangers have their own catapults as well, totaling 3 MS hangers to sortie and launch from their individual catapults. Underneath the new catapults, a pair of retractable fixed-positioned Laser Cannons are closed within until activated for combat. These cannons were the same type as the main cannon mounted on the Baikal-class. The enhancements tripled their MS combat force, firepower, and scramble time, making each ship of its class approximately three times more formidable against enemy targets.

While the Baikal-class was the fastest battlecruiser of the ESF, it wasn't as fast as CBS-74 Ptolemaios 2. The enemy always managed to escape capture using its Trans-Am System. While it's not clear if ESF engineers mimicked Ptolemy's ability, the propulsion upgrades allows the class to execute Trans-Am. Similar to its modernized predecessor, it uses a hybrid propulsion system; the Volga-class utilizes both plasma and particle propulsion systems separately. The plasma drives are used for cruising speeds and the particle engines for high acceleration. However, much of its propulsion applications and capabilities are undefined.

For combat, the class is still used best as long-ranged guns for rear support while its MS force intercepts enemy target(s). It is still weak at close-ranged combat and reliant on its MS force to compensate for its weaknesses. Although faster, its new mass affected its ability for evasive maneuvers and became a larger target for enemy forces. For unexplained reasons, ESF engineers never added additional hull armor nor tried to create a class that rivals the Ptolemy. Overall, the class is a powerful upgrade to the Baikal-class, but it still doesn't match the might of CB engineering.

Two of these powerful gun mounts are mounted in front of the bridge of the ship, and have a large firing arc and elevation angle, making them the main weapon for the battlecruiser. Four more "main cannons" are concealed within the new starboard and port MS Hangers located beneath the catapults. It is unknown if the catapult cannons are capable of being moved like the dorsal-mounted cannons.

These smaller lasers are mounted in fixed firing positions on the top, bottom, and also on the side thrusters of the ship. These smaller lasers are capable of firing angled-beams and are normally used for defensive purposes. Fourteen of these cannons are built into the dorsal bow of the ship, in front of the 10m-grade dual laser cannons with another fourteen mounted on the ventral surface behind the shuttlebay. The new MS hangers also contain an unknown number of these weapons.

The launchers are fixed on the hullsides engine pods, making them quite vulnerable. When a cruiser is docked at an orbital elevator, its missile pods rotate upwards 90 degrees.

Primarily used for long distance travelling purposes.[1] Specific way of usage is unknown but can be speculated to be for powerful acceleration and deceleration purposes.

Following the Battle of Lagrange 2 the Earth Sphere Federation disbanded the organization known as A-Laws, transferring whatever Baikal-class cruisers they had over to the Earth Sphere Federation Army. Between A.D. 2312 and A.D. 2314 the ESF Army, knowing the faults and weakness of the Baikal-class, decided to upgrade some of them into Volga-class battleships by creating a new module for the vessel.

Before and during the ELS conflict Volga-class battleships served in the ESF-Army alongside their Baikal-class predecessors. One such cruiser was used to transport Kati Mannequin and her husband Patrick Colasour to the Celestial Being Mothership. During the final battle of the ELS Conflict many Volga-class were deployed, with many either being assimilated or destroyed by the Extraterrestrial Living-metal Shape-shifter during combat.[2]

The upgrades that had helped to extend the longevity of the Baikal-class, and more likely had come to extend the Volga-class, would eventually end by AD 2364. While it is unknown if any Volga-class battleships operated anymore, the class had likely been decommissioned and retired as new ship designs were quick to phase out its predecessors in a matter of a few years. 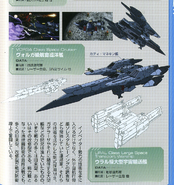